On February 18th the ‘Features & Analysis’ section of the BBC News website’s Europe page included an item promoted as follows: 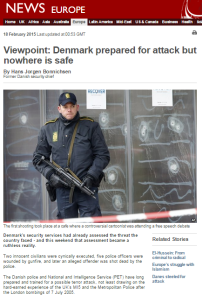 “Ex-security chief looks at how Denmark terror threat was handled”.

The article – titled “Viewpoint: Denmark prepared for attack but nowhere is safe” – was written by the former head of the Danish intelligence services, Hans Jørgen Bonnichsen, but will obviously have been subject to BBC editorial review before publication.

Readers are informed that:

“The two attacks [in Copenhagen] replicated the terror directed at the French satirical magazine Charlie Hebdo in Paris.”

Of course the terror attacks in Paris were not only “directed at the French satirical magazine Charlie Hebdo”, but also at shoppers and staff in a kosher supermarket. That missing information is crucial in light of the reference to “symbolic targets” which appears in the next paragraph.

“The Danish copycat gunman, named locally as Omar El-Hussein, followed the same modus operandi and aimed his desire for revenge against the exact same symbolic targets as the French gunmen.”

The writer then goes on to claim:

“The attackers all sought revenge for the insulting depiction of the Prophet Muhammad, the Israeli occupation of the Palestinian territories and the actions of police, who represent what they see as the state oppression of Islam.”

Let’s break that sentence down in order to appreciate what BBC audiences are actually being told.

In both Paris and Copenhagen the first target to be attacked was connected to cartoonists who had drawn images which some chose to regard as insulting to their religion: the Charlie Hebdo offices and a venue hosting a discussion on free speech with Swedish cartoonist Lars Vilks. In other words, there at least exists some sort of connection between the claim that “[t]he attackers all sought revenge for the insulting depiction of the Prophet Muhammad” and those “symbolic targets” selected by the terrorists.

Regarding the claim that the terrorists “sought revenge for […] the actions of police”, the writer makes sure to include the qualifying phrase “who represent what they see as…” in order to indicate to readers that the grievance he attributes to the attackers is not established fact but a matter of perception.

However, no such signposting qualifier is applied to the claim that the terrorists “sought revenge for […] the Israeli occupation of the Palestinian territories” and, crucially, at no point in his entire article does Bonnichsen clarify to readers that half of the targets of the terror attacks in Paris and Copenhagen were identifiably Jewish locations – a kosher supermarket and a synagogue – with no connection whatsoever to Israel.

The writer’s unqualified claim that the terrorists in Paris and Copenhagen attacked “symbolic targets” because of “Israeli occupation of the Palestinian territories” would have been egregious enough had he actually bothered to inform readers that European Jews were targeted in those attacks. The notion that French and Danish Jews are “symbolic targets” of revenge for something entirely unconnected to them taps into the exact same theme used by Tim Willcox following the Paris attacks and promotion of that theme without adequate qualification and clarification not only erases the antisemitic motives of the terrorists themselves from audience view, but also helps propagate and mainstream the antisemitism which lies behind that faux linkage.

However, the absence of any mention of the fact that Jews were targeted in Paris and Copenhagen makes Bonnichsen’s promotion of the dumbed-down cliché “the Israeli occupation of the Palestinian territories” as a motive for the terror attacks even more problematic because, in addition to concealment of the antisemitic ideologies of the attackers, the uninformed reader seeking to understand Islamist terrorism in Europe is being encouraged to believe that it can be blamed on Israel.

The BBC claims that it meets its public purpose remits by ensuring that its output is focused upon:

“Providing in-depth explanation of the most significant issues facing the UK and the world (such as the Middle East, global terrorism, climate change, public service reform, crime and immigration), all of which will help to support citizenship around a serious news agenda. The BBC will offer in-depth, multi-platform seasons as a means of engaging audiences in these big issues and helping them make sense of the world.”

If the BBC really does aspire to meet the above public purpose remit, its editors need to acknowledge that the amplification of facile sound-bites such as that promoted by Bonnichsen is no substitute for honest presentation of the ideologies which inspire Islamist terrorism. Relatedly, they also need to urgently ask themselves why ‘analysis’ of specific incidents of terrorism in two European capitals – which from the BBC’s point of view was presumably intended to augment audience understanding of the issue – erases from view the fact that the victims of half those attacks were targeted for no other reason than their being Jews.