Regular readers would of course have had few expectations of receiving a wholly impartial report on the Israeli prime minister’s speech to the US Congress on March 3rd from the BBC’s Middle East editor but even they might have been surprised by the tone and content of some of the comments made by Jeremy Bowen as he live-tweeted the speech to his 121 thousand followers – especially in light of the fact that BBC editorial guidelines – including those on accuracy and impartiality – also apply to its staff’s Twitter accounts.

So what did the man who only the day before had alluded to himself as a “serious student of the Middle East” mean by that (small H) “holocaust card” jibe? The accepted definition of the idiom ‘play the card’ is to exploit a specific issue for political advantage. In other words, Bowen is accusing Netanyahu of cynically making use of the memory of six million murdered Jews for his own political gain and his use of the words “once again” indicates that Bowen is of the opinion that this is a regular practice on the part of the Israeli prime minister.

Netanyahu’s actual words were as follows:

“My friend, standing up to Iran is not easy. Standing up to dark and murderous regimes never is. With us today is Holocaust survivor and Nobel Prize winner Elie Wiesel.

Elie, your life and work inspires to give meaning to the words, “never again.”

And I wish I could promise you, Elie, that the lessons of history have been learned. I can only urge the leaders of the world not to repeat the mistakes of the past.

Not to sacrifice the future for the present; not to ignore aggression in the hopes of gaining an illusory peace.

But I can guarantee you this, the days when the Jewish people remained passive in the face of genocidal enemies, those days are over.”

Clearly any real “serious student of the Middle East” would have an understanding of the place of the Holocaust in Jewish collective memory just as he would be familiar with the Iranian regime’s record of anti-Israel rhetoric and practical support for terrorist groups seeking the destruction of the Jewish state. Bowen, however, put whatever knowledge he may have aside – instead allowing his personal political prejudices to dictate his commentary.

The same practice was evident in other tweets:

In fact, Netanyahu did not “conflate” Iranian Shiism with Sunni Jihadists as Bowen claims. What he actually did was point out that both those separate and competing ideologies are equally important problems.

“Iran’s regime is as radical as ever, its cries of “Death to America,” that same America that it calls the “Great Satan,” as loud as ever.

Now, this shouldn’t be surprising, because the ideology of Iran’s revolutionary regime is deeply rooted in militant Islam, and that’s why this regime will always be an enemy of America.

Don’t be fooled. The battle between Iran and ISIS doesn’t turn Iran into a friend of America.

In this deadly game of thrones, there’s no place for America or for Israel, no peace for Christians, Jews or Muslims who don’t share the Islamist medieval creed, no rights for women, no freedom for anyone.

So when it comes to Iran and ISIS, the enemy of your enemy is your enemy.” 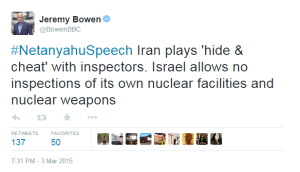 He neglected to clarify that – unlike Iran – Israel is not party to the NPT and of course failed to note that Iran was declared non-compliant to the treaty it did sign as long ago as 2003.

If readers are wondering what Bowen meant by “politics of fear”, that point is clarified in his ‘analysis’ included in two subsequent BBC News website reports on the topic of Netanyahu’s speech.

“The speech was classic Netanyahu. He mixed the politics of fear with the politics of bravery in adversity. Iran was gobbling up Middle East states – a reference to its influence in Syria, Lebanon, Iraq and Yemen – while Israel stood strong, never again allowing the Jews to be passive victims.”

Of course Iran’s active role in the Syrian civil war and its supply of funding and weapons to terrorist organisations such as Hizballah means that it has rather more than just “influence” in those locations and others throughout the Middle East. However, Bowen’s intent is clearly not to inform audiences of the objective facts, but to persuade them that the Israeli prime minister uses unfounded threats to elicit the political response he seeks by means of emotion.

Bowen’s jaundiced and openly disdainful view of the Israeli prime minister’s speech to Congress was not only communicated to BBC audiences via Twitter. As we will see in part two of this post, BBC reports on the issue were notable for similar inaccuracies, half stories and lack of impartiality.