After the undisguised political monologue from Lyse Doucet which opened the item concerning reconstruction in the Gaza Strip featured in the February 26th edition of the BBC World Service radio programme ‘World Have Your Say’ (available here from 26:30 for a limited period of time), listeners heard presenter Chloe Tilley say: 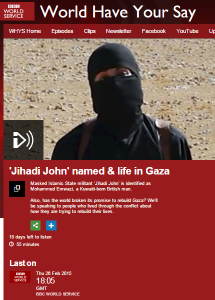 “I want to bring in Najla who’s an aid worker and a blogger in Gaza City and is on the line now.”

No further introduction was given – not even a surname – and so listeners were not able to put the contribution of Najla Shawa (now working for Oxfam and previously an UNRWA employee) into its appropriate context, including her endorsement of Doucet’s previous inaccurate and context-free statements. Shawa also made plenty of context-free statements of her own, with no attempt from Chloe Tilley to rectify that problem.

“We’re totally locked in – we can’t travel, we can’t leave. We’re just simply locked in a place that is being more and more problematic each day.”

“…having like tons of explosives being hit around your house, this is not something that ordinary people should go through. [….] people are traumatised – specially children – and all the mothers I know – the families, my friends – they suffer with their babies, with their kids; even the older ones – the children and the teenagers – from the effects of such traumatic events.”

As we see, Hamas and its terrorism had no place in the picture presented by this BBC selected guest. Doucet then came in again (33:56): 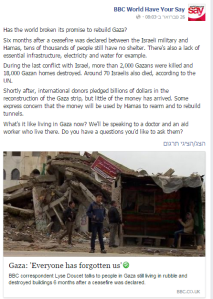 “Coincidentally, I’ve just come out of a studio where we finished a recording for an hour-long documentary that we’ve just finished on children of the Gaza war where for the last nine months we’ve been following the children through the war, after the war and what’s happening to them. And it’s heart-breaking that, you know, a vast majority of Gazan children have seen loved ones dying before their eyes. They’ve seen their homes destroyed. They can’t make sense of why this war has anything to do with them. And as Najla just says, who cares for those who need care? Fathers are traumatised, mothers are traumatised. Even people who lead Gaza’s main trauma counselling centres have lost dozens of family members. Its…the whole of Gaza in some way is in a state of trauma. Notwithstanding that, I have to say after having again spent time there, as you know Gazans don’t lose their sense of hospitality. They don’t lose their sense of humanity. It’s very humbling to see how they survive but now they’re saying….even the people of Gaza – as resilient as they are – are beginning to break. Going mad, one man said to me. How do you possibly cope with this? They call it the world’s biggest prison and it does feel that for people there. And Najla mentioned the young people and there was…I spoke to a university student who studied English Literature – now if that is not a statement of hope and trying to be engaged with the world – and I said to her ‘do some of your friends discuss taking the risky path of going on a boat, trying to cross to Europe’, because we are seeing Gazans appearing on these boats. They’re smuggled out to Egypt or Libya. And she said ‘yes, they’re doing it’. She used this expression: she said ‘from dead to dead’. There’s no exit from Gaza and the only exit is one which has a very, very, very high risk that you may not survive.” [emphasis added]

According to the CIA World Fact Book there were some 753,000 children aged between 0 -14 in the Gaza Strip in July 2014. Doucet failed to provide any factual evidence for her unsourced claim that the “vast majority” of those children “have seen loved ones dying before their eyes” and “their homes destroyed”. Likewise, her egregious promotion of the “world’s biggest prison” trope and the notion that “there’s no exit from Gaza” is contradicted by the fact that 8,708 Gazans used the Erez crossing to exit the Gaza Strip in January 2015 alone.

The programme’s next guest was the controversial UNRWA spokesman (and former BBC employee) Chris Gunness .

“Let me introduce Chris Gunness who’s from the UN Relief and Works Agency. Chris, I know you’ve written so much about this and you’ve written an article in the Guardian as well – we’ll Tweet out a link to it for people who haven’t seen it. Ehm…your thoughts on what’s happening in Gaza and why – why it seems that all these pledges of money don’t seem to be materialising.”

Indeed that article was promoted by the BBC on Twitter and Gunness repeated some of the same themes in his contribution to this programme after having clarified his place in the very cosy echo chamber.

“Well first of all, one important point to make I think – and I entirely endorse what Lyse and Najla have so brilliantly said – is that this is man-made. These things which the last two speakers have described are the result of deliberate political choices which the world community is making. We have chosen to allow huge swathes of Gaza to be destroyed because, you know, security guarantees – if there’d been proper engagement with Gaza – could have been in place because what Gaza desperately needs is political engagement. […] So first of all it’s a direct result of political choices and we have to make different political choices.”

In other words, Gunness would have BBC audiences worldwide believe that the international community is responsible for the situation in the Gaza Strip rather than the terrorist organisations which initiated the last war and the previous ones. After long, emotive, context-free descriptions of the situation in the Gaza Strip rivalled only by those in Doucet’s introduction, he went on to rubber stamp more of her context-free sound bites:

“I mean not only is Gaza unique in the annals of contemporary warfare in being a…a war zone with a fence around it – there is nowhere safe to flee – but even within Gaza the international community has failed to provide people with adequate standards of housing.”

After Gunness’ portrayal of the failure of donors to meet the pledges made at last year’s Cairo conference and his own organisation’s activities, Tilley introduced another contributor – Nuraddin Biladi [phonetic] – described as “associate professor at the College of Arts and Sciences at Qatar University”.

Relating to the question of why his country had not met its financial pledge to the reconstruction of Gaza, Biladi noted that donors were “outstretched” due to the numbers of refugees from Syria and Iraq and also cited the issue of ISIS as having affected the policy makers in the Middle East, Europe and the US.

“It’s interesting hearing Nuraddin talk about ISIS. I was told by a good source that in an area where ISIS is actually minting money, believe it or not, on one side of the coin is the Al Aqsa Mosque in Jerusalem. And another interesting vignette: on the mobile phone of one of the kids that were arrested in Paris recently – a Muslim child – was a speech of Yasser Arafat. And I guess that’s by way of saying that, you know, we have been thinking about extremism in this region – out there in Afghanistan, out there in Pakistan. The fact is that having a deeply marginalised Muslim Arab community is becoming a cause celebre also. So the idea that there’s this extremist element out there somewhere and Gaza is something different: it isn’t like that. So these moderate Arab countries and other Arab countries to which Lyse refers have to realise that what is…they’re allowing to happen in Gaza is having a direct impact on the rising tide of extremism which they’re so concerned about. So don’t see Gaza as an isolated factor. Don’t see it as something which is simply sort of there: it is very much part and parcel of the narrative of extremism and the rising tide of extremism that is, you know, so prevalent and so shocking today in the Middle East.”

Yes, dear readers: the BBC World Service actually did broadcast Chris Gunness’ transparent attempt to portray Israel and Israeli self-defence against Palestinian terrorism as the root cause of Jihadist extremism throughout the Middle East and beyond.

Ironically, the next segment of the programme involved Gunness making repeated declarations about UNRWA’s ‘neutrality’ which he claimed “we take […] extremely seriously”. Gunness claimed that “no-one has ever produced any evidence whatsoever” that building materials intended for UNRWA have been commandeered by terrorist organisations but neither Doucet nor Tilley asked him to comment on the documented evidence of building materials supposedly safeguarded by the UN supervised mechanism being sold on the black market in Gaza.

Gunness’ political campaigning then shifted to an old theme he has promoted via the BBC World Service on at least one previous occasion.

“….what is the morning after strategy – not just for moderate Arab states but also for Western governments who are spending tax-payers’ money, if it ever comes through – to rebuild Gaza? Are there any security guarantees that Gaza will not be destroyed again? I mean it’s been….we’ve seen the destruct….as Lyse said, children of the age of six have seen three such rounds of destruction. And, you know, what is the point also of reconstructing a society which you don’t allow to trade?”

Again, neither Doucet nor Tilley made any effort to correct the misleading impression given to listeners by Gunness by informing them that exports are in fact transported out of the Gaza Strip. In January 2015, for example, 804 tons of merchandise left the Gaza Strip.

The final guest on this programme was introduced by Chloe Tilley only as “Belal who is a doctor in Gaza City”. Belal Dabour – who works at Shifa hospital – was also interviewed by the BBC World Service during last summer’s conflict and promoted the notion of a ‘massacre’ in Shuja’iya. Like many of his colleagues, Dabour finds as much time for political activity as he does for medicine but listeners to this programme were not informed of that fact before they heard the ‘neutral’ doctor claim that: 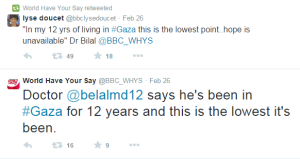 “…the Israeli policy is to impact a cumulative effect on both the…on the population, on the economy, on the overall situation in Gaza which will be after period – after many wars – which would bring us to the verge of collapse…”

If the aim of this programme had been to inform listeners worldwide about the real reasons for the slow pace of reconstruction in the Gaza Strip then obviously it would have failed miserably. But that outcome was of course entirely predictable, with the choice of three guests (two of whom were inadequately identified) all subscribing to the same politically motivated point of view together with the heavily featured context-free propaganda from Lyse Doucet ensuring that the emotion-laden take-away message absorbed by audiences contributed little to their understanding of the background to the situation as it stands today.

It is therefore not difficult to determine that the provision of accurate and impartial information to which the BBC is supposedly committed was trumped by the opportunistic use of half an hour of this programme to promote a particular political narrative. The BBC clearly needs to explain to licence fee payers why that is the case.