An article which originally appeared the previous evening under the title “Israel election: No clear winner, exit polls suggest” underwent numerous changes as the votes were counted overnight, ending up under the headline “Israel election: Netanyahu’s Likud storms to victory“. As was the case in much of the BBC’s prior coverage of the topic, that article and the others appearing on the same day focused audience attentions on the topic the election was not about.

“Mr Netanyahu had vowed not to allow the creation of a Palestinian state, while Zionist Union expressed support for a two-state solution and promised to repair relations with Palestinians and the international community.

In the wake of the vote, chief Palestinian negotiator Saeb Erekat said Palestinians would step up their bid for statehood.

“It is clear that Prime Minister Benjamin Netanyahu will form the next government, so we say clearly that we will go to the International Criminal Court in the Hague and we will speed up, pursue and intensify” diplomatic efforts, he told AFP news agency.”

An insert from the BBC’s Middle East editor added:

“He [Netanyahu] also made a series of promises that would worsen Israel’s relations with the US and Europe if he continues as prime minister. He promised thousands of new homes for settlers in the occupied territories, and said he would not allow the Palestinians to have a state.”

Jeremy Bowen produced an article titled “Israel election: Dramatic turnaround for Netanyahu” which he opened by brushing aside the topic of his organisation’s previous heavy promotion of opinion polls. 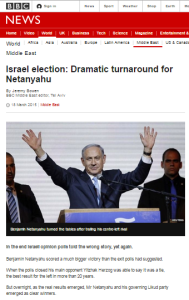 “In the end Israeli opinion polls told the wrong story, yet again.”

“The prime minister narrowed the gap with Mr Herzog’s Zionist Union, and then overhauled it, by turning sharply towards the ultra-nationalist Israeli right.

He issued a series of grim warnings about the consequences for Israel if he lost; Arabs with Israeli citizenship were voting, so his people needed to turn out.

Mr Netanyahu made a series of promises that would worsen Israel’s relations with the United States and Europe if he stays on as prime minister.

He promised thousands of new homes for settlers in the occupied territories. And he said that he would not allow the Palestinians to have a state.”

The BBC Jerusalem Bureau’s Kevin Connolly produced two articles, the first of which was a report from the Likud campaign headquarters titled “Likud celebrates surprise success in Israeli election” in which readers were informed that: 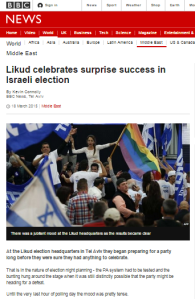 “If a new right-of-centre coalition is formed it will be formed in the context of Mr Netanyahu indicating that he was prepared to block the formation of a Palestinian state.

International observers trying to interpret what this result means for hopes of a resumption in the peace process between Israel and the Palestinians will see that as a bleak signal.

A Herzog-led government might have been a more comfortable partner for the US State Department and for European governments interested in reviving talks.

But for now, it appears that the Israeli electorate has decided otherwise.”

“Everyone knows, of course, that the Israeli right, led by Benjamin Netanyahu, is at best sceptical about the prospect of a peace deal with the Palestinians, while the left under Yitzhak Herzog is much keener on the kind of constructive engagement that would keep the White House and the State Department happy. […]

He made it clear that in the modern Middle East with its rising tide of militant Islamism and its deepening atmosphere of instability the conditions just do not exist to create a Palestinian state.

It was a smart move invoking the image of a leader who is prepared to stand up for Israel’s interests in an uncertain world and who is not worried if his single-mindedness on the issue irritates the Europeans, the Americans or indeed anyone else.

At one point he was asked directly if his return as prime minister would mean categorically that a Palestinian state would not be established.

He answered with the single Hebrew word “Achen” – which means “indeed”.”

The BBC News website also produced a profile of Netanyahu titled “Israel’s Benjamin Netanyahu: Commando turned PM” in which readers were told that:

“For Mr Netanyahu, the number one issue has long been Israel’s security, and he has taken a tough line towards the Palestinians, seeing land-for-peace as too dangerous to accept.

His third term shifted from renewed peace talks, which collapsed in acrimony, to war with militants in Gaza just three months later.”

Readers are not informed that those talks collapsed because the PA decided to from a unity government with Hamas.

Later on in the article, however, this example of the ‘land for peace’ formula appears:

“Despite having fiercely criticised the Oslo Accords between Israel and the Palestinians, in 1997 Mr Netanyahu signed a deal handing over 80% of Hebron to Palestinian Authority control and signed the Wye River Memorandum in 1998 outlining further withdrawals from the West Bank.”

No effort is made to inform readers that the unprecedented construction freeze of 2009/10 did not cause the PA to come to the negotiating table until one month before it expired and, as ever, the BBC fails to inform audiences accurately with regard to the significance of the Israeli demand for the PA to recognise Israel as the Jewish state:

“Mr Netanyahu’s government was criticised by some in the international community for not renewing a partial freeze on Jewish settlement-building and possibly avoiding a collapse in peace talks with the Palestinians in late 2010.

He publicly accepted the concept of a demilitarised Palestinian state, but insisted the Palestinians accept Israel as a “Jewish state” in turn and make reciprocal concessions.

In 2015 he distanced himself from accepting the prospect of a state, dismissing it as irrelevant given the rise of militant Islam across the Middle East.”

Later on in the evening the BBC News website published two articles with a US slant, the first of which – by PJ Crowley – was subtly titled “Netanyahu win gives Obama a headache“. 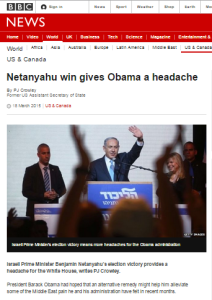 “Over the weekend, he made explicit what many, particularly the Palestinians, had long believed.

As long as he is prime minister, there will not be a Palestinian state. He even acknowledged that his administration used settlement construction to undermine the process.

These statements sent a moribund peace process into freefall, calling into question the future of the Oslo process.”

Apparently BBC audiences are to believe that “the future of the Oslo process” was not called into question by – among other things – the failure of the Oslo Accords’ guarantors to insist upon disarmament of Hamas before the formation of a unity government together with the Palestinian Authority.

Another article titled “Israel election: US concern over ‘divisive’ rhetoric” told readers that:

“During campaigning, Mr Netanyahu said he would not allow the creation of a Palestinian state if re-elected. […]

White House spokesman Josh Earnest said: “It has been the policy of the United States for more than 20 years that a two-state solution is the goal of resolving the conflict between the Israelis and Palestinians.”

The US would “re-evaluate our approach” in the wake of Mr Netanyahu’s comments ruling out a Palestinian state, he said.”

“On a warning from Mr Netanyahu that his opponents were bussing Arab-Israeli voters to polling stations, he [Earnest] said: “Rhetoric that seeks to marginalise one segment of their population is deeply concerning and it is divisive, and I can tell you that these are views the administration intends to communicate directly to the Israelis.” “

Yet again the BBC refrains from providing audiences with the necessary context concerning the anti-Zionist parties running on the Joint Arab List and the foreign funding for organisations which ran a campaign against Netanyahu.

“The Palestinian President, Mahmoud Abbas, said he would work with any Israeli government that accepts the two-state solution, without which, he said, peace negotiations stood “no chance”.”

The uninformed reader seeking to understand the topic of the Israeli election from these seven articles could only arrive at the conclusion that the Likud party’s victory is the prime factor preventing a peace agreement being signed between Israel and the Palestinians. ‘Economical’ presentation of subjects such as the reason for the breakdown of previous rounds of talks coupled with the complete absence of any reference to the fact that almost a year ago the Palestinian Authority chose to form a ‘unity government’ with a terrorist organization which does not recognize Israel’s right to exist and is committed to its destruction mean that the bottom line effect of these reports is to mislead audiences with regard to the peace process in general and the significance of the result of the election in particular. As we observed here in January 2013 after the previous election and again in December 2014 when the BBC first began reporting on this one:

“Most blatantly obvious is the fact that the BBC’s insistence upon framing this election almost exclusively in terms of the potential effect of its results on ‘the peace process’ reflects its own institutional attitude towards that subject, both in terms of its perceived importance and in terms of the curious notion that only what Israel does has any effect upon that process’ chances.”

0 replies on “Elections 2015: the morning after – BBC News website coverage”