On March 28th an article appeared on the BBC News website’s Middle East page under the headline “Iran nuclear talks ‘enter endgame’ in Switzerland“. Relating to the apparently imminent prospect of a framework deal between the P5+1 and Iran concerning the latter’s nuclear programme, the report is remarkably economical with regard to the content and efficacy of the deal itself, framing the issue in very generalized terms. 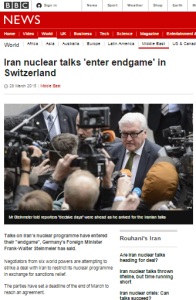 “After meeting Mr Steinmeier and French Foreign Minister Laurent Fabius, Mr Zarif said: “I think we can in fact make the necessary progress to be able to resolve all the issues and start writing them down in a text that will become the final agreement.”

He has already met US Secretary of State John Kerry in Lausanne.

Mr Fabius added a note of caution, saying: “We have moved forward on certain points, but on others not enough.” […]

Iran insists its nuclear programme is for peaceful purposes but world powers fear it has military ambitions.

Some of the most contentious issues remain unresolved, says the BBC’s Barbara Plett Usher.

Potential sticking points in the nuclear talks are thought to include the pace at which sanctions would be lifted, how long the deal will last and how much of Iran’s nuclear facilities will be open to inspection.”

Barbara Plett Usher also produced an equally anodyne filmed report on the topic which, in addition to being broadcast on BBC television news programmes, appeared on the corporation’s website under the title “Growing optimism for Iran nuclear talks“. In the synopsis to that report audiences were given an upbeat message: 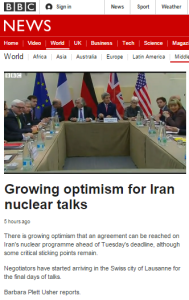 “There is growing optimism that an agreement can be reached on Iran’s nuclear programme ahead of Tuesday’s deadline, although some critical sticking points remain.”

In the report itself, Plett Usher told viewers:

“They’re […] closing in on a deal that would prevent any Iranian attempt to develop a nuclear weapon in exchange for ending sanctions on Iran.”

“Progress has been made on steps to scale back Iran’s uranium enrichment programme but how much nuclear research it will be allowed to conduct is still a contentious issue, as is the pace at which sanctions would be lifted.”

But will the deal – as Plett Usher claims – really “prevent any Iranian attempt to develop a nuclear weapon”? Aspects of the emerging results of negotiations make that statement highly questionable, as noted by other journalists presenting a far more critical and detailed picture of the negotiations than the superficial account offered to BBC audiences.

Writing in the Telegraph, Peter Foster notes that:

“…it now seems Iran will be allowed to keep 6,000 of its centrifuges, considerably more than the 500-1,500 the US originally wanted, or the 4,000 “compromise” offer Washington made a year ago.

The direction of travel is clear. Even more worryingly, the US is reportedly considering allowing Iran to keep some centrifuges at Fordow, the impenetrably hardened underground facility that Iran built in secret, and only admitted to having in 2009 after they were rumbled by Western intelligence.

Western officials soothingly say there is no need to get hung up on the details, just focus on the one-year “breakout time” that keeps Tehran at least 12 months away from being able to make a bomb and trust to the inspections regime that will alert the world long before that happens.

“Distrust and verify” says Mr Obama and yet scratch the surface of these negotiations and it is clear that there are plenty of reasons to question whether Iran will ever actually submit to the effective scrutiny on which the credibility of this deal ultimately rests.

Only this week the head of the International Atomic Energy Agency revealed that Iran has replied to just one of the 12 questions UN inspectors want answered about its nuclear past, while an IAEA report last month voiced concerns about “undisclosed nuclear related activities” including the “development of a nuclear payload for a missile.””

“The United States believes that, prior to 2003, Iran conducted extensive studies and tests on building a bomb and mounting it on a long-range missile — belying its claims that it has pursued nuclear technology only for peaceful purposes. U.S. intelligence was long ago turned over to the International Atomic Energy Agency, and multiple U.N. Security Council resolutions, starting in 2006, have ordered Iran to cooperate with the IAEA in clarifying these “possible military dimensions.”

Twice, in 2007 and in 2013, Iran agreed with the IAEA on a “work plan” to clear up the military research issues. In both instances, it then stonewalled inspectors, refusing to answer questions or permit access to sites. After the agency sought access in 2011 to a military complex called Parchin, where warhead detonation tests may have been carried out, satellite surveillance revealed that Iran had demolished buildings and excavated ground in an apparent cover-up operation.

In frustration, the IAEA published an extensive report detailing what it already knew about the illicit bomb work and listed 12 outstanding issues. Two years later, in the hope of sealing an interim deal allowing the partial lifting of sanctions, the government of Hassan Rouhani agreed on a “step-by-step” plan to answer the questions.

But instead of implementing the plan, the regime went back to stonewalling. IAEA chief Yukiya Amano told The Post’s Steven Mufson this week that Iran had provided information on just one of the 12 issues. On two others, Mr. Amano said, it had given “very limited” responses, and the remaining nine had not been addressed at all.

An appropriate response to this blatant violation of agreements would be to insist that Iran complete the IAEA work plan before any long-term accord is signed or any further sanctions lifted. Inspectors need their questions answered so that they will be able to determine later whether Iran has violated the controls on its nuclear research expected to be part of a deal. Furthermore, it is vital to establish that Tehran will deliver on its commitments and that it will be held accountable if it does not.

Remarkably, however, negotiators — including the supposedly hard-line French, who have taken the lead on the “military dimensions” issue — have reportedly agreed to let Iran’s noncompliance slide. The IAEA’s unanswered questions will be rolled over and rebundled into the new agreement, with a new time line. That means that Iran will have some sanctions lifted before it complies with a commitment it first made eight years ago.”

Members of the BBC’s licence fee paying public will no doubt be asking themselves why the two above publications – among others – are capable of providing serious analysis which really does “enhance audiences’ awareness and understanding of international issues” whilst the corporation which bills itself as the “standard-setter for international journalism” makes do with superficial, anodyne reporting on such a crucial topic.