We are often told that the impartiality of BBC content should be judged “over time” and some guidance as to what that term means can be found in this section of the BBC’s editorial guidelines.

“In achieving due impartiality, a ‘series of programmes’ may be considered as a whole.

The term ‘series of programmes’ applies to the following:

Content that deals with the same or related issues, within an appropriate period, and are clearly linked.

This may include a strand with a common title; different types of linked programmes (such as a drama with a following debate); a clearly identified season of programmes or items on the same or similar subjects; or a set of interlinked web pages.  Such programmes, items or web pages need to achieve due impartiality across the series, and online content should include links or signposts to the other online elements.

The intention to achieve due impartiality in this way should be planned in advance.”

With BBC coverage of the recent Israeli election now having come to a close, we can examine the question of whether due impartiality was achieved in the ‘series of programmes’ relating to that topic. 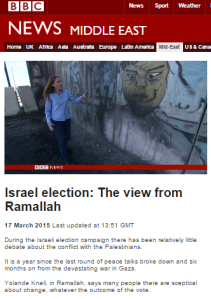 All the relevant BBC content – written, audio and filmed – already discussed on these pages is available in chronological order under ‘related articles’ below.

The most outstanding characteristic of BBC reporting on the 2015 Israeli election from day one was the insistence of its journalists on framing the story from the angle of its effect on negotiations with the Palestinians – despite the fact that other concerns were much higher up on voters’ lists of priorities. So, whilst BBC audiences heard or read occasional brief references to ‘economic issues’, ‘the cost of living’ and ‘house prices’, they were never actually provided with any in-depth background information on those topics and hence were incapable of appreciating why – for example – a previously non-existent party (Kulanu) won ten seats in the incoming Knesset.

The BBC’s disproportionate focus on the topic of the ‘peace process’ can be illustrated by taking a look at the number of Palestinian commentators interviewed and quoted by the BBC in just three days of coverage, beginning with the day of the election itself. 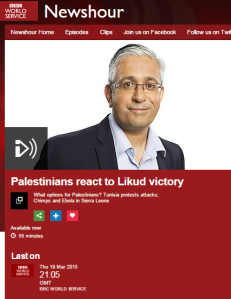 Despite extensive use of the ‘peace process’ theme and the generous airtime given to Palestinian interviewees, not one BBC report raised the topic of Palestinian responsibility for the lack of progress in negotiations and the related topic of long overdue elections for both the Palestinian Legislative Council and the PA president was likewise not even briefly mentioned.

In other words, BBC audiences heard and read more commentary on the Israeli election from Palestinian contributors than from Israeli politicians standing for election.

Little attempt was made to introduce BBC audiences to most of the 26 parties competing in the election or to explain the differences between their positions. Background information on the topic of the Israeli electoral system was mostly confined to references to the fact that the system makes a coalition government almost inevitable.

The topic of the foreign-funded campaign to influence the outcome of the election was completely ignored in all BBC coverage even though that factor played a role in influencing the election’s result and foreign intervention in elections in a democratic country should obviously have been a big story. 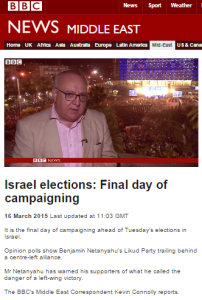 Whilst the BBC put considerable focus on the statement made by the Israeli prime minister on March 17th concerning the related issue of busing of Joint Arab List voters to the polling stations, it did not report at all on the comments (or later fall-out) made at the Left-wing rally in Tel Aviv on March 7th – even though a BBC team was present at the event.  Despite the fact that Zionist Union leader Herzog later cited that incident as having affected his party’s performance “without a shadow of a doubt“, BBC audiences remain completely unaware of it ever having happened, just as they were not informed of assorted statements made by members of the Joint Arab List.

When answering criticism of his organisation’s coverage of Israel, the BBC’s director general recently claimed:

“It is hard… tough. We do aim to give as impartial coverage as we can across the period.”

In this case it is not difficult to see that the BBC came nowhere near to achieving “due impartiality over time” – primarily because its journalists chose to cover the Israeli election almost exclusively from an angle which, whilst of only minor relevance to the issue itself, coalesced more with their own pre-existing views and agenda. And whilst audiences were fed reams of material on “the Palestinian view”, their understanding of what should have been the story’s actual subject matter – the factors influencing the election’s result – was hampered by selective omission of information and a distinct lack of interest in anything which got in the way of the story’s chosen framing.

Lord Hall might care to ponder the fact that it would be much less “hard” and “tough” to cover Israel-related news accurately and impartially were the journalists working for his organisation to stick to reporting the stories that exist rather than instead promoting the stories they want to tell.

Elections 2015: round up of BBC coverage – election day filmed reports, part one

Elections 2015: round up of BBC coverage – election day website reports

Elections 2015: the morning after – Doucet on BBC television news

One-staters get BBC WS platform for promotion of BDS, ‘resistance’ and ‘apartheid’ trope

Misinformation from BBC’s Kevin Connolly on From Our Own Correspondent

0 replies on “Elections 2015: was the BBC’s coverage impartial?”