“…there were many interviews with members of the Brotherhood itself – some rank-and-file, some described as leaders. All of these stressed that their movement favoured freedom and democracy, and did not seek to impose an Islamic order on people against their will. Some of the expert commentators accepted these statements more or less at face value, stressing the Brotherhood’s evolution towards pragmatism during its long years in opposition and semi-clandestinity…”

Source: ‘A BBC Trust report on the impartiality and accuracy of the BBC’s coverage of the events known as the “Arab Spring”’ – June 2012

One might have perhaps thought that in the four years which have passed since the so-called ‘Arab Spring’ in Egypt, BBC correspondents would have had the opportunity to garner enough understanding of the Muslim Brotherhood to prevent them from repeating the same face value acceptance – and amplification – of its messaging as was seen in BBC coverage of the events at the time. 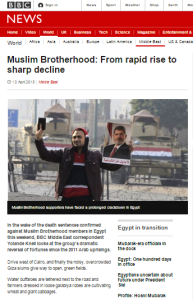 However, if the article titled “Muslim Brotherhood: From rapid rise to sharp decline” produced by Yolande Knell on April 13th is anything to go by, not only is that is definitely not the case, but Edward Mortimer’s description of Muslim Brotherhood statements being naively “accepted … at face value” by BBC “expert commentators” may be in need of review.

Knell has no comment to add on the use of the phrase “democratic process” by a supporter of an organization which states that its intention is to create a state ruled by religious law which discriminates against women, non-Muslim minorities and others.

“On Saturday, a court confirmed death sentences on the group’s General Guide, Mohammed Badie, and others for planning attacks against the state.

But another man, Ahmed, insists they have done nothing wrong.

“God willing, we’ll see the democratic process get back on track soon,” he says.”

Neither does Knell make any effort to explain the reasoning behind her promotion of the notion that the Muslim Brotherhood as a whole is ‘relatively moderate’.

“Yet many in Egypt accept the clampdown on the Brotherhood, believing it failed its test in power, and across the entire region the fate of this relatively moderate Islamist organisation has undergone a dramatic turnaround.”

The Oxford Dictionary defines the political sense of moderate as “not radical or excessively right- or left-wing”. The aim of running a state ruled by Sharia law cannot accurately be described as anything other than radical and right-wing and of course there is little evidence of ‘moderation’ on the part of the Egyptian Muslim Brotherhood or the movement’s Qatar-based  ‘spiritual guide’ Yusuf al Qaradawi.

‘Moderate’ political organisations obviously do not support terrorism or cultivate links with its perpetrators – but a journalist who uses the makeover term “political faction” to describe a terrorist group which just months ago launched thousands of missiles at civilians will obviously be oblivious to that nuance.

“Not far away, in the Palestinian territories, Hamas – which is aligned to the Muslim Brotherhood – is also suffering from the organisation’s demise.

Its leaders were treated like VIPs in Egypt during the Brotherhood’s brief reign.

But in February, a court in Cairo joined Israel, the United States, the European Union and others in pronouncing Hamas a terrorist organisation.

In Gaza, which is controlled by the political faction, ordinary people feel more isolated than ever. […]

Across Gaza, the green flags of Hamas still flutter defiantly above the mangled metal and rubble of homes destroyed in last summer’s war with Israel.” [emphasis added]

Knell’s take-away message to readers comes right at the end of her article:

“But throughout much of the Middle East, there is a sense that times are changing.

And what worries many is that just as the Muslim Brotherhood, the grandfather of Islamist groups in the region, is in decline, so fanatical ones – like Islamic State – are gaining momentum.

The danger is that efforts to suppress the Brotherhood could radicalise its younger supporters and help swell the ranks of the extremists.”

Yolande Knell does not reveal to her readers the identities of the worried “many” who apparently believe that the political aspirations of young Middle Eastern Muslims are to be found exclusively on a scale lying between ‘moderate’ Islamists and ‘fanatical’ ones and hence promote the highly debatable claim-cum-threat that the decline of the Muslim Brotherhood could “swell the ranks of the extremists”.

However, a clue to the potential source – and background motivations – of that claim promoted and amplified by Knell comes in the form of a report published by Associated Press about the Muslim Brotherhood in Jordan which appeared almost a month before Knell’s article saw the light of day. Interestingly, the two pieces show some curious similarities.

In a section of her article about the Jordanian Muslim Brotherhood Yolande Knell writes:

“A new, officially licensed branch defines itself as strictly Jordanian, saying it has cut ties to the regional movement, so it is not identified as militant.”

“The new, officially licensed Brotherhood offshoot defines itself as a strictly Jordanian group, saying it cut ties with the regional movement to avoid being branded as militant.”

“The legal status of the other, larger faction is less clear, but it is keeping its links to the wider Brotherhood.”

“The larger Brotherhood faction, still loyal to the regional movement, alleged the government engineered the division to weaken the group.[…] The status of the second faction now remains unclear.”

“The danger is that efforts to suppress the Brotherhood could radicalise its younger supporters and help swell the ranks of the extremists.”

Readers of the AP report were informed that:

“In Jordan, some warned that the government’s apparent divide-and-control policy could backfire by pushing more Brotherhood supporters into the ranks of extremists like the Islamic State group, seen as the main threat to the country’s stability.”

“Some warn the government crackdown could radicalize Brotherhood supporters and help swell the ranks of the Islamic State group.”

In other words, Yolande Knell’s supposedly impartial take-away message to Western audiences on the topic of the Muslim Brotherhood appears to have come straight (or perhaps via AP) from the Jordanian Muslim Brotherhood horse’s mouth.

So much for ‘standard-setting’ journalism.

The BBC and the Brotherhood