Ahead of the centenary commemorations of the Armenian Genocide on April 24th, a number of related reports have appeared on the BBC News website’s Europe page, including:

The written reports include an insert – most with a link to the BBC’s recently updated backgrounder titled “Q&A: Armenian genocide dispute“. 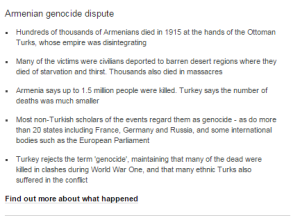 Some insight into the BBC’s approach to its own presentation of the Armenian Genocide can be gleaned from the link to a BBC Trust ESC ruling from 2008 included in the footnote to that Q&A article.

“…as there is no consensus over the account of the event, even amongst the international community, and taking into account that there was no admission by the Turkish State that this was genocide, it is appropriate that the BBC continues to report this event accurately by stating the facts as they are known, which includes the views of the various sides to the argument without taking a position.”

Under the sub-heading “Who recognises it as genocide and who does not?” the Q&A article states:

“Argentina, Belgium, Canada, France, Italy, Russia and Uruguay are among more than 20 countries which have formally recognised genocide against the Armenians.

The European Parliament and the UN Sub-Commission on Prevention of Discrimination and Protection of Minorities have also done so.

The UK, US and Israel are among those that use different terminology to describe the events.”

Whilst Israel has yet to officially recognize the Armenian Genocide, it has sent an official delegation to the centenary commemoration ceremonies and in January of this year President Reuven Rivlin raised the issue in his speech at the UN General Assembly on the occasion of Holocaust Memorial Day.

“Rivlin recalled quoting the words of Avshalom Feinberg, a leading member of Nili, the Jewish underground, which cooperated with the Allies during World War I.

In 1915, when Armenians were being massacred by Turks, Feinberg wrote: “My teeth have been ground down with worry, whose turn is next? When I walked on the blessed and holy ground on my way up to Jerusalem, I asked myself if we are living in our modern era, in 1915, or in the days of Titus or Nebuchadnezzar? Did I, a Jew, forget that I am a Jew? I also asked myself if I have the right to weep ‘over the tragedy of my people’ only, and whether the Prophet Jeremiah did not shed tears of blood for the Armenians as well?” In New York, Rivlin told those gathered at the UN that when Feinberg had written those words 100 years ago – “100 years of hesitation and denial” – nobody in the land of Israel at the time had denied that the massacre that had taken place.

“The residents of Jerusalem, my parents and the members of my family,” Rivlin said then, “saw the Armenian refugees arriving by the thousands – starving, piteous survivors of calamity. In Jerusalem they found shelter and their descendants continue to live there to this day.””

Avshalom Feinberg was of course not the only member of Nili to witness the Armenian Genocide. In his memoir Eitan Belkind noted that he compiled a report for the British Authorities on the subject of the atrocities he had witnessed during his travels in Mesopotamia and elsewhere.

“As soon as we found horses to ride and soldiers to accompany us, Jacob Baker went on his way to Mosul, I set out to my region, along the River Khabur. At night before departure we heard terrible, heart-rending female screams. The Armenian camp was one kilometer away from our house. The screaming continued all night. We asked what was happening, they told us that children were being taken from their mothers to live in dormitories and continue their education. However in the morning when we set off and crossed the bridge across Euphrates, I was shocked to see the river red with blood and beheaded corpses of children floating on the water. The scene was horrible, as there was nothing we could do.

After three days riding, I reached Aram- Naharaim where I witnessed a terrible tragedy. There were two camps next to each other, one Armenian and one Circassian. The Circassians were “busy” with exterminating the Armenians. There were also Arab sheikhs, who selected beautiful Armenian girls as their wives. Two women approached me and gave their photos to me. Should I ever get to Aleppo and find their families (whether their families were alive, was a question), the women asked me to send their greetings to whomever I find there.

The Circassian officer seeing me talk to the two Armenian women ordered me to leave but I stayed to see what would happen to the Armenians. The Circassian soldiers ordered the Armenians to gather dry grass and pile it into a tall pyramid, then they tied up all the Armenians who were there, almost 5000 souls, their hands tied together and put them in a circle around the pile of grass and set it afire in a blaze, which rose up to the heaven together with the screams of the wretched people, who were being burned to death. I fled from the place I could not stand this horrifying sight. I rode as fast as I could, wishing to get as far from the place as possible. After two hours of crazy gallop I could still hear creams of the poor victims until they died out. In two days I returned to that place and saw the burned bodies of thousands people.

I approached the Sandjer Mountains where Yezidim lived. At the foot of the mountain, on my way to the city Urfa in the north, I witnessed several mass-exterminations of the Armenians. People were wretched, desperate to madness. In one of the houses I saw an Armenian woman cooking her own child’s body in a pot. All the roads were strewn with the corpses of murdered Armenians.”

Whist travelling from Constantinople (Istanbul) to Haifa via Anatolia in 1915, Sarah Aaronsohn saw scenes similar to those later witnessed and described in his diaries by her brother Aaron in July of the following year as he travelled from Damascus to Constantinople. In November 1916 Aaron Aaronsohn sent a memorandum describing the atrocities to the British authorities and an edited (by the British) version of that memorandum is to be found in the Foreign Office records.

That report of course joins the many others from the time documenting the atrocities against the Armenian people. As we see, however, the BBC is still waiting for an “admission by the Turkish State that this was genocide”.