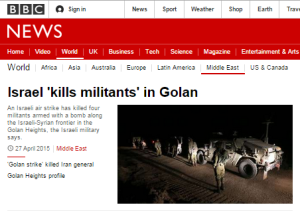 Those who clicked on the link to the report itself were greeted with no less ambiguous punctuation, which must have left audiences wondering if the BBC was in doubt about the people killed having really been ‘militants’ or whether it wasn’t sure that they were actually dead. Similar qualifying punctuation – intended to communicate to readers that the BBC distances itself from statements made and/or terminology used – was seen in the body of the report and in the caption to its illustrative photograph. 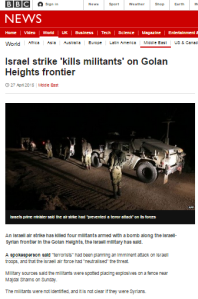 So what were BBC audiences told about the incident which took place at around 21:30 on April 26th?

“An Israeli air strike has killed four militants armed with a bomb along the Israeli-Syrian frontier in the Golan Heights, the Israeli military has said.

A spokesperson said “terrorists” had been planning an imminent attack on Israeli troops, and that the Israeli air force had “neutralised” the threat.

Military sources said the militants were spotted placing explosives on a fence near Majdal Shams on Sunday.

The militants were not identified, and it is not clear if they were Syrians. […]

In Sunday’s incident, Israeli troops observing the demilitarised zone between the Israeli-occupied Golan Heights and Syria noticed four figures reportedly trying to place an explosive device on the fence along the frontier.

An Israeli air force plane was scrambled and fired a missile at the militants, killing them all.

The Israel Defense Forces (IDF) spokesperson said on Twitter there was no doubt that they had been “en route to [an] imminent attack on our forces”.”

In addition to the fact that – contrary to the BBC’s claim – the terrorists have apparently been identified by pro-Assad activists and others as Syrians and a Hizballah-linked group has claimed responsibility for the attack, the report crucially fails to clarify to readers that the incident took place in Israeli territory.

“The incident, which occurred at 9:30 p.m. on the northern Golan Heights near Majdal Shams, began when Combat Intelligence Collection units identified four suspects planting the explosives on the eastern side of the border fence, within Israeli territory. […]

“The incident is fairly local, and is under control,” the source said.

He stressed that although the terrorists infiltrated into Israel, they did not cross the 110-km. border fence, which is within Israeli territory.”

With none of the necessary background and context provided, the report states:

“In January, an Iranian Republican Guards general and at least six fighters from the Lebanese Shia Islamist movement Hezbollah were killed in an Israeli air strike in the Syrian Golan Heights.”

Part of this article is devoted to other incidents in the wider region.

“Hours later, missile batteries operated by Hezbollah and the Syrian army in the Qalamoun Mountains, near the border between Syria and Lebanon, were reportedly attacked.

Al-Jazeera attributed the strike to the Israeli military, but Israeli media quoted sources as denying the report.

A source in the Israeli defence establishment told Haaretz that there had been fighting in the area between Syrian government forces and jihadist militants from al-Nusra Front, al-Qaeda’s affiliate in Syria. Israel had no interest in getting involved in the conflict between the two sides, he added.

The IDF spokesperson’s office would neither confirm nor deny the report.

Beyond repeating the unconfirmed claims made in assorted reports from Al Jazeera and Al Arabiya, the BBC has no concrete information to provide to its audiences. Notably, no effort is made to clarify to readers that the fighting in the Qalamoun area is a fact rather than just something said by an Israeli “source” and only those who clicked on the link to Ha’aretz (and got past the pay wall) would have come across the following information contradicting the Al Jazeera claims which the BBC chose to amplify.

“Factions in the Syrian opposition said on social media that they have four units stationed in the Qalamoun region, and claimed that they were responsible for the attack on the Syrian missile base. The opposition units fired some 30 Grad rockets at the base, they said.”

Of course many members of the “Arab media” in the region indulge in agenda-based reporting and the Qatari outlet Al Jazeera is a prime example of that phenomenon. Before amplifying unverified claims, the BBC would obviously do well to bear in mind that some of the governments behind various “Arab media” outlets also play a role in supporting assorted factions involved in the Syrian civil war.