We have commented here before on the BBC’s lack of journalistic curiosity regarding the extent of Iranian involvement in the conflict in Yemen. On May 7th the BBC News website’s Middle East page published an article in its ‘features’ section by Dr David Roberts of King’s College, London under the title “Viewpoint: How far is Saudi-Iranian rivalry fuelling Yemen war?“. As its opening paragraphs show, the aim of that article is clearly to lead BBC audiences towards the view that claims of Iranian involvement in Yemen are overstated. 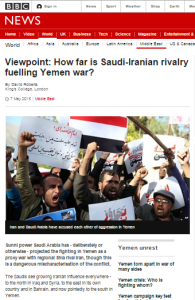 “Sunni power Saudi Arabia has – deliberately or otherwise – projected the fighting in Yemen as a proxy war with regional Shia rival Iran, though this is a dangerous mischaracterisation of the conflict.

The Saudis see growing Iranian influence everywhere – to the north in Iraq and Syria, to the east in its own country and in Bahrain, and now pointedly to the south in Yemen.

But this view belies the complexities of Yemeni domestic politics, overemphasises the role of Iran, and is unlikely to lead to anything approaching a successful conclusion, as is being seen with the Saudi-led bombing campaign, which is yet to achieve its stated aims.”

The same theme is continued throughout the article.

“Whatever the religious similarities between the Houthis and Iran, there is an implicit notion that any commonality matters. Whether nominally united or separated by faith, it is seldom as determining a factor in action as it is fatuously perceived.”

“Nevertheless, a perennial problem with such instances is that the evidence of Iranian involvement often comes from sources that have a vested interest in plugging such a line: whether from the Saudi, Yemeni or American side.”

“Overall, the perennial resort to the “Iranian-backed Houthi fighters” logic is problematic as it simplifies the conflict too much and mandates too much of an external focus.”

Whilst the conflict in Yemen is undoubtedly rooted in domestic issues, this article does little to provide readers with objective and factual assessment of reports of Iranian involvement. Moreover, it completely ignores statements by Iranian officials including the one made by an Iranian parliamentarian after Houthi rebels took control of Yemen’s capital city.

“An Iranian politician close to that country’s Supreme Leader, Ayatollah Ali Khamenei, could not contain himself. Ali Reza Zakani, an MP, boasted that Sana’a was now the fourth Arab capital in Iranian hands – after Beirut (through Hizbollah), Damascus (through President Assad) and Baghdad (through Iraq’s democratically elected Shia-led government).”

A report which appeared in the Financial Times on May 8th highlights an additional – although by no means unknown – aspect of the story.

“They are hundreds of miles apart and their local struggles have little in common, yet Lebanon’s Shia force Hizbollah and Yemen’s Houthi rebels are opening up about a relationship forged by sectarian politics transforming the Middle East. […]

A Hizbollah commander, who withheld his name because members are not permitted to speak to media, said Houthis and Hizbollah trained together for the past 10 years. “They trained with us in Iran, then we trained them here and in Yemen.

Hizbollah has long been suspected of channelling Iranian support to the Houthis. For years, Houthi officials have been spotted at Beirut hotels and are believed to be hosted on Iran’s dime. The Houthi television channel al-Maseera is based in Beirut’s Hizbollah-controlled southern suburbs. “There’s been an active Houthi office in Beirut, and the city has been a popular meeting place between Yemeni political groups and other regional actors for some time,” said Yemen analyst Adam Baron, a visiting fellow at the European Council of Foreign Relations.”

It remains difficult to see how the BBC can claim to fulfil its remit of providing its funding public and wider audiences with a fact-based “understanding of international issues” relating to aspects of the conflict in Yemen in particular, or the already under-reported issue of Iranian policy in the Middle East in general, if it continues to avoid any serious in-depth reporting on the topic.