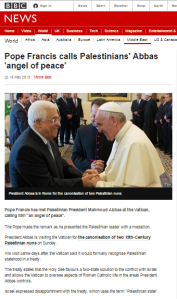 “Pope Francis has met Palestinian President Mahmoud Abbas at the Vatican, calling him “an angel of peace”.

The Pope made the remark as he presented the Palestinian leader with a medallion.”

“The BBC’s David Willey in Rome says that after 20 minutes of private talks, Pope Francis gave Mr Abbas the medallion depicting an angel of peace adding: “It is appropriate because you are an angel of peace.””

But is that in fact an accurate portrayal of events?

The Italian daily La Stampa’s ‘Vatican Insider’ website reports the story somewhat differently, running with the headline “Pope embraces Abu Mazen and bids him to be an angel of peace” in its English language version of the story. The article adds:

“As is tradition with heads of State or of government, Francis presented a gift to the Palestinian leader, commenting: “May the angel of peace destroy the evil spirit of war. I thought of you: may you be an angel of peace.””

(For comparison, the Italian language version of the same story is here.)

So it would appear that there is a distinct possibility that rather than describing Mahmoud Abbas as an ‘angel of peace’, the Pope in fact urged or wished him to become one by taking steps to bring about a peaceful solution to the Arab-Israeli conflict. That, of course, would leave readers with a markedly different impression than the version of the story promoted by the BBC.

The source of this possible misunderstanding of the Pope’s words appears to be various news agency reports. As we have seen before, it is not unheard of for the BBC to fail to fact check information provided by news agencies before reproducing their content. Clearly this story too needs urgent review in order to ensure its compliance with BBC editorial guidelines on accuracy.