As readers no doubt recall, back in February the BBC’s Head of Editorial Complaints, Fraser Steel, announced the provisional outcome of the Editorial Complaints Unit’s consideration of the collective points made in the many complaints concerning remarks made by Tim Willcox during BBC coverage of the rally in Paris on January 11th 2015. 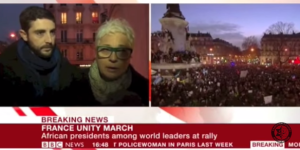 Members of the public have now informed us of the receipt of a further communication from Fraser Steel following the presentation of comments on the provisional finding.

“Having had the opportunity of considering comments on the provisional finding, I’m now finalising it on the basis set out in my previous letter, apart from one modification.

It’s clear from a number of the comments I received that I understood the first of the summarised points of complaint (“That the question put by Tim Willcox to an interviewee was misleading in that it linked the Paris killings in a kosher supermarket with events in the Middle East”) in a different sense from some who complained.

It has been put to me, and I have accepted, that Mr Willcox’s words suggested a broader link between perceptions of Palestinian suffering and the incidence of anti-Semitic incidents.

However, that doesn’t alter the outcome because I don’t think suggesting a link of that kind can be viewed as a breach of editorial standards (or even as particularly controversial, considering the correlation between anti-Semitic incidents and Israeli actions with an adverse impact on Palestinians which has been noted by organisations such as the Community Security Trust).”

As was noted here at the time, Steel’s misunderstanding of the essence of the complaints on that topic was plain to see. Unfortunately, he obviously still does not (or will not) comprehend the issue properly.

Willcox was not making some academic comment on the ‘epidemiology’ of antisemitic incidents. What he did – whilst interrupting a woman talking about the need for recognition of the targeting of European Jews – was to insert a false equivalence (evident in his use of the words “as well”) in the form of ‘Palestinian suffering’ which he attributed to “Jewish hands”. In other words, Willcox falsely implied that – like Jews in France – Palestinians are targets because of their religion and/or ethnicity and that European Jews can be held collectively responsible for the perceived actions of Israel.

The bottom line of this latest communication from Fraser Steel is that he stands by his earlier proposal to reject en masse the large number of complaints received about Willcox’s remarks. Complainants still have the possibility of appeal to the BBC Trust at their disposal for a limited period of time, but as Steel points out in this letter, “the Trust does not consider every appeal brought to it”.

Four months (and goodness knows how many publicly funded man-hours) on, the BBC has not budged an inch from its original classification of Willcox’s remarks as “poorly phrased”. As Steel wrote in his provisional findings which have now been deemed ‘finalised’:

“I share Mr Willcox’s view that his comments were poorly phrased, but I think they were no worse than that.”

One cannot but recall the words of Nick Cohen at the time:

“…Willcox is not some isolated and aberrant racist; his views are the standard opinions of the European left middle class. I meet them every day in my political neighbourhood. They are the result of ignorance rather than malice. (Although I find that in time a dark alchemy can transform ignorance into malice.)

Willcox like so many others does not understand that anti-Semitism is not a rational, if regrettably bloody, critique of Israeli foreign policy but an insane conspiracy theory that has captured the minds of millions of fanatics, moved whole nations and led to uncountable deaths.

I wonder how many more bombs it will take to blow these people out of their folly. In my bleaker moments, I suspect they will take it to their graves.”

The BBC’s handling of this case has from the very beginning been characterized by a complete disregard for its social responsibilities as the publicly funded national broadcaster of a country in which less than a year ago antisemitic hate incidents reached record levels. As we noted here in January:

“Precisely because of the fact there are people in the UK who make threats to British ten year-olds whilst invoking a fabricated connection between them and a conflict thousands of miles away, the BBC still needs to issue a prominent on-air statement clarifying that Willcox’s statement was not merely “poorly phrased”, but that the linkage he promoted based on the premise that Jews anywhere in the world hold collective responsibility for the perceived actions of the State of Israel is both false and antisemitic.”

Unfortunately for both the credibility of the BBC complaints system and the broader reputation of the corporation as a whole – those words still stand.