This post was written by CAMERA Senior Researcher Gidon Shaviv. It was originally published in Hebrew at Presspectiva

Occasionally the media lock onto a narrative, interpreting events to reinforce the interpretation. This dynamic may explain The New York Times and Telegraph reports on the new Israeli Government Basic Guidelines, buttressing an image of Netanyahu as having a uniquely hardline stance on the peace process: 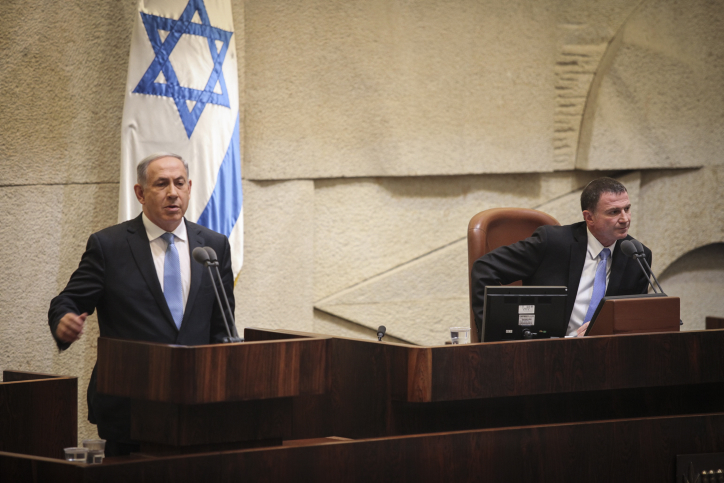 The Telegraph mentioned the guidelines in the context of a call by former European diplomats to harshen the European Union’s stance towards Israel:

“Days after Mr Netanyahu struck deals with four smaller parties to form a narrow Right-wing coalition, a document presented on Wednesday to Israel’s parliament, detailing his government’s guidelines, made no mention of the two-state solution. It also made no reference to establishing a Palestinian state, merely vowing that the government would “advance the diplomatic process and will strive for a peace agreement with the Palestinians”. “

Similarly, a New York Times editorial presented the new Guidelines as proof of Netanyahu’s lack of commitment to the two-state solution:

“On the eve of the March 17 elections, Mr. Netanyahu said flat-out that no Palestinian state would be established during his tenure, and while he later softened his position, the possibility of any serious negotiating initiative seems dead. The guidelines for Israel’s new government even omitted the term “Palestinian state.”

The Telegraph and The NYT are correct in pointing out that the words “Palestinian state” and “two-state solution” do not appear in the new guidelines. The first to note this absence was a piece originally published in Haaretz titled “Despite Obama’s demand, Netanyahu’s coalition guidelines make no commitment to Palestinian state.” However, the Haaretz article also included pertinent information that:

The wording of the political clause in the document is similar to the wording used in Netanyahu’s previous government in 2009 and 2013.

Given that the current document is essentially the same as the guidelines to the two previous governments, why is this non story worthy of a headline? Haaretz presents the following explanation:

Although there is no apparent change in the wording of the diplomatic clause as they have appeared in Netanyahu’s past government lines, there is a difference: Israel’s international standing and the fact that since its last election period, the U.S. and the European Union states have demanded that Netanyahu prove – both in policy and in action – that his government is committed to the two-state solution.

Whether the explanation is convincing or not, neither the Telegraph nor New York Times editorials added the historical context provided by Haaretz. Notably, Haaretz itself did not go far enough in its context. Looking back at Israeli government guidelines for the last twenty years, it is evident that the current guidelines are not unique. In fact, no Israeli government, either from the left or the right, has ever stated an unequivocal policy of creating a “Palestinian state” in its guidelines.

The Olmert Government (2006), while clearly supportive of a two-state solution, makes use of vague language to avoid a mention of a Palestinian state:

The two Sharon governments (2001 and 2003) both had in their guidelines a statement that, although the various factions in the coalition have decided to work together, “each continues to adhere to its ideological positions on political issues and on the subject of settlement, including the nature and conditions of permanent agreements.” The First Sharon government guidelines posit that  “the Government will act to promote peace with the Palestinians and will work toward interim agreements that include compromises. ” The second Sharon government guidelines do mention a Palestinian state, but only to clarify that the government has yet to decide its policy on this issue:

Should practical political negotiations include the establishment of a Palestinian State, the topic will be discussed and decided upon by the Government.

The Barak government (1999), though clearly supportive of a two-state solution, also does not specifically use the words Palestinian state:

In short, the last six Israeli Governments, even when undoubtedly supportive of the peace process, did not use the explicit terms “two state solution” or “Palestinian state”.  In failing to note that the current government’s guidelines were not unusual in this regard, readers are misled to believe that the government guidelines were indicative of an important shift in policy.

However, there is one more illustrative piece of information. Compare the guidelines of the first Netanyahu government (1996) to the current government guidelines:

1996- The Government of Israel will propose to the Palestinians an arrangement whereby they will be able to conduct their lives freely within the framework of self-government. The Government will oppose the establishment of a Palestinian state or any foreign sovereignty west of the Jordan River, and will oppose “the right of return” of Arab populations to any part of the Land of Israel west of the Jordan River.

2015 – The government will advance the diplomatic process and will strive for a peace agreement with the Palestinians and with all of our neighbors, while safeguarding the security, national and historical interests of Israel.  If an agreement of this kind is reached, it will be brought for the approval of the cabinet and the Knesset, and if necessary, for a national referendum as well.

The comparison makes clear the important story that The Telegraph and The New York Times missed.

Instead of focusing on the politically meaningless “omission”, the papers could have focused on the radical change that Israeli politics have undergone between the first and current Netanyahu governments.