On the evening of Tuesday, May 26th, a missile fired from the Gaza Strip exploded near Gan Yavne – fortunately without causing any physical injuries. Several hours later, Israel responded to the attack by carrying out airstrikes on four terror infrastructure sites in the southern Gaza Strip.

This latest attack is the fifth since the ceasefire came into effect at the end of August 2014. Like the previous missile attack from the Gaza Strip a month ago and the one before that in December and indeed the one before that in October, this incident received no coverage on the BBC News website either on Tuesday evening or on Wednesday morning. 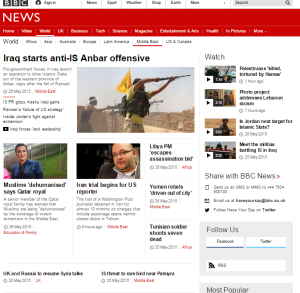 We can however ascertain that the BBC was aware of the fact that a missile attack had taken place because on the morning of May 27th a report on the Israeli response to it appeared on the BBC Arabic website under the interestingly phrased headline “Israeli warplanes launched a series of attacks on military positions of the Palestinian resistance factions in the Gaza Strip”.

In typical ‘last-first’ BBC style, that report focuses on the effect rather than the cause, with mention of the attack itself relegated to paragraphs 11 to 13 of the 15 paragraph report. No less remarkable is the BBC’s adoption and amplification of the public relations language of the terrorist organisations which portray themselves as “resistance factions”.

This is not the first time (see related articles below) since the end of the conflict last August in which we have seen Israeli responses to Palestinian violations of the ceasefire agreement reported in Arabic but not in English.

Of course the BBC cannot claim to be fulfilling its public purpose of building “a global understanding of international issues” when it serially ignores the attacks which are the precursor to the next round of conflict between Israel and terrorist organisations in the Gaza Strip.