As reported recently by the Community Security Trust and Jewish news sites, neo-Nazis are planning a demonstration against “Jewish privilege” in Golders Green, North London, for Saturday, July 4th.  What struck some as interesting about the theme of the demo was the incorporation by right-wing extremists of an idea – that Jews possess inherent structural social advantages by virtue of birth or position – which typically resonates on the far-left. 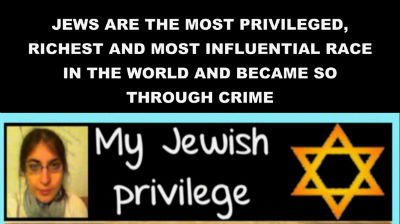 Whilst the idea of ‘privilege’ is intellectually suspect for a host of reasons, it’s troubling that Jews, of all people, are often considered among “the privileged” within this paradigm.  Not only has the post-Holocaust taboo against antisemitism been eroded, but Jews, who represent a fraction of 1% of the world’s population, are – in a manner evoking classic tropes – now routinely portrayed by virtue of their relative success in the West, as an elite, monied and dangerously powerful group.

Further, the idea that Jews benefit from instiutional privilege has begun to gain some traction within the mainstream left.

Maital Friedman wrote an op-ed at JTA back in January, on Martin Luther King Day, which asked Jews to be “aware of racial inequality and of the daily privileges we [Jews] enjoy that others cannot”. On April 7th, The New Republic published an article, titled ‘Does the Holocaust discount Jewish white privilege?’, which – though narrowly rejecting the idea of ‘Jewish privilege” as such – argued that even Jews whose relatives were killed in the Holocaust can now be beneficiaries of ‘white privilege’.

Though we’ve responded previously at length to the suggestion that Jews and/or Israelis enjoy unfair advantages, in monitoring media coverage of Israel year after year, we’d argue that Palestinians are – in many respects – uniquely privileged.

Here’s our list of the advantages (privileges) of waking up in the morning as a Palestinian – the daily effects of Palestinian privilege.

1. Western media outlets hold you to a lower moral standard than Jewish Israelis.

2. Media outlets and human rights activists routinely ignore or even excuse expressions of extreme antisemitism, misogyny, homophobia and religious bigotry within your community.

3. Terrorist attacks by members of your community against Jewish civilians are often contextualized, rationalized or even defended as the “understandable” behavior of an oppressed (underprivileged) group.

4. Anti-historical narratives you routinely peddle to the media, disputing the Jewish connection to the Land of Israel, are legitimized.

5. Your leaders’ abrogation of Palestinian human rights is often blamed on Israel and/or “the occupation”.

6. You can expect the media to obfuscate or ignore your leaders’ rejection of legitimate Israeli offers of peace, and (regardless of the circumstances) blame Israel for the breakdown of talks.

7.  Though the political orientation of your national movement is reactionary, you nonetheless receive support from the liberal left.

8. Even though your leaders indicate that any future Palestinian state will be 100% Judenfrei, your movement is almost never labeled racist.

10. Your religious leadership’s support for the Nazis during WW2 is downplayed or ignored.

We likely missed a few, so please feel free to provide other examples of Palestinian privilege in the comment section.

0 replies on “The daily effects of Palestinian privilege”