Writing at the Weekly Standard, William Stern provides a fascinating behind the scenes view of the IDF’s legal department. 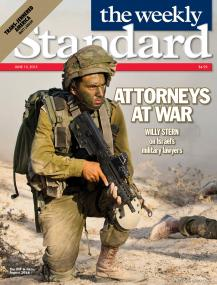 “Buried deep in an old bunker at a Tel Aviv military base is the IDF’s visual operations room. Sit for an hour and you can watch live black-and-white footage of Hamas fighters in Gaza using random kids as human shields while bullets are flying; firing weapons from the second floor of al-Wafa Hospital (used as a command-and-control center as well as a surveillance post); and jumping into a clearly labeled Red Crescent ambulance to escape fire from IDF ground troops.

Then there’s the time that Palestinian families were seen scurrying up to a rooftop right after the IDF had warned civilians to evacuate. Why? Who knows for sure. The most likely explanation is that savvy Hamas commanders knew a win-win situation when they saw one. Hamas fighters have been known to force families into harm’s way. Hamas operatives know that IDF commanders will likely call off a strike if many civilians are present. But if the civilians are killed, well, there will be graphic photos to show off to sympathetic journalists. “We can prove we are in the right because in many instances the video is there for all to see,” says Lt. Col. Limor Gross-Weisbuch, who runs the IDF’s video unit. “But the outside world doesn’t seem to care.”

She is, sadly, correct. Surely, the world has been turned upside down. A powerful coalition of self-righteous journalists, pro-Palestinian NGOs, left-leaning academics, biased human rights organizations, and, of course, the United Nations has looked at some situations and routinely accused the IDF of perpetrating war crimes, of murdering innocents, of gross violations of international law.”