On June 14th Israel’s Foreign Ministry released the following video which, whilst not the most sophisticated piece of video work ever produced, will certainly ring a bell with all those who followed the BBC’s coverage of the conflict between Israel and Hamas last summer. 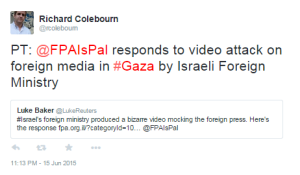 ….and the local Foreign Press Association (where Colebourn is a board member), which released a distinctly patronising statement instructing the MFA how it should be spending its time.

Interestingly, the FPA appears to have forgotten about another statement it put out August 2014.

And no less remarkable is the fact that the video’s critics do not seem to be overly keen to address the actual issues behind the satire.