As readers no doubt recall, when the Israeli Foreign Ministry published its report on Operation Protective Edge last week, the BBC found it appropriate to promote the response from Hamas spokesman Sami Abu Zuhri. 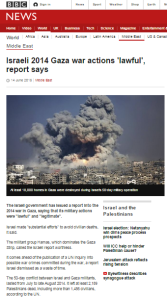 A spokesman for Hamas said the Israeli report was “valueless”.

“Israeli war crimes are clear because they were committed in front of live cameras,” Sami Abu Zuhri said.”

A member of the public who contacted the BBC in relation to that editorial decision received an answer from BBC Complaints which includes the following:

“I understand you feel a report shouldn’t have featured the views of Sami Abu Zuhri.

We provide a range of views of either side of the conflict but this isn’t suggesting that such views are factual and the BBC doesn’t endorse them. The BBC doesn’t hold a stance on any particular matter, including the Middle East so it is not up to the BBC to label any particular person or group.”

As we have often seen in the past (including in the headline to the said report), the self-styled “standard-setter for international journalism” knows perfectly well how to communicate to its audiences the fact that it has not verified or does not endorse claims, descriptions or statements through the use of punctuation. Hence, if the BBC did for some reason find the promotion of the view of a spokesman for an internationally recognized terror organization editorially justifiable, one would at least expect that organization to be described accurately (without the use of the euphemistic term “militant”) and one would also have expected to find the term war crimes placed in inverted commas in order to avoid misleading audiences by suggesting that assertion was established fact.

There is of course also wider implication in this response from BBC Complaints. People say all manner of things which can be represented as “a range of views” but we now learn that their connection to reality is of no interest to the culturally relative BBC and that audiences are apparently expected to be able to distinguish factual views from non-factual narrative without the BBC’s help.

The obvious question arising from that is why BBC licence fee payers should need the corporation at all in an age in which they can find a plethora of views, narratives and propaganda of varying degrees of factual accuracy on the internet for free.

0 replies on “BBC Complaints: what we tell you isn’t necessarily factual”