Obviously not content with the previous amplification of propaganda rhetoric used by anti-Israel campaigners on BBC World Service radio last month, the BBC recently decided to promote business reporter Roger Hearing’s mainstreaming of the same ‘open air prison’ trope on several of its other platforms too. 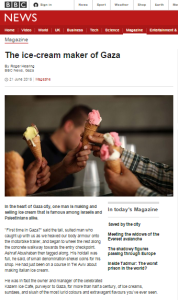 The June 18th edition of BBC Radio 4’s ‘From Our Own Correspondent’ includes a piece from Hearing introduced by presenter Kate Adie (from 22:27 here) as follows:

“It’s nearly a year now since Israeli forces launched air and ground attacks on Gaza in response – they said – to a series of rocket attacks launched from inside the Palestinian territory. More than two thousand people were killed in the conflict and many homes and business properties in Gaza were damaged or destroyed. Rebuilding started soon after a ceasefire was announced last August but progress has been slow. A blockade on the territory imposed by Israel has delayed the arrival of construction materials. Roger Hearing has been to see how one business has carried on despite the difficulties.” [emphasis added]

So, in addition to casting doubt on the reasons for the outbreak of hostilities on July 8th 2014 (almost a month of incessant attacks on civilians, with hundreds of missiles fired rather than “a series”), Adie also fails to distinguish between civilian and combatant casualties, refrains from noting Egypt’s closure of its border with the Gaza Strip and misleads audiences with the inaccurate claim that the slow pace of reconstruction in the Gaza Strip is because of Israeli restrictions on the import of dual use goods whilst making no effort to inform them of the terrorism which is the cause of those restrictions.

‘From Our Own Correspondent’ also has a BBC World Service radio version presented by Pascale Harter and Hearing’s report was featured in that programme’s June 20th edition too. Harter’s introduction to the item (from 17:55 here) was notably more accurate and impartial than the one heard by listeners to Radio 4.

“But right now, a glimpse of Gaza as you might not know it. It’s nearly a year since Israeli forces launched air and ground attacks there after weeks in which hundreds of rockets were fired into Israel from inside the Palestinian territory. More than two thousand people were killed in the conflict and many homes and business properties in Gaza were destroyed. It is a very difficult business environment but Roger Hearing finds one entrepreneur winning fame if not fortune.”

All four versions of the report include overly dramatic, context-free descriptions from Hearing.

“…despite the apocalyptic destruction in parts of the city from last year’s war, you do also see a lot of giggling, playing children among the ruins.”

All four versions also fail to inform audiences that, in addition to ice cream making equipment, the Rafah area smuggling tunnels have of course been used to import weapons into the Strip and that metal piping of assorted types is regularly used by terrorists to manufacture missiles.

“He proudly showed us the shiny Italian gelato machines installed in the back rooms of his cafe building. When he was trying to import them, it was hard to convince the Israelis apparently that there wasn’t some other, more threatening purpose for the tall chrome boxes with pipes and chutes and nozzles.

It’s likely at least some of the machines were hauled through the tunnels under the border with Egypt, until that smuggling operation was closed down a few months back. Now that’s a strange image: young men in pitch darkness, sweating to drag huge boxes through rickety holes in the sand, and all so that Gazans could eat fine ice cream.”

Whilst BBC audiences remain serially unaware of Hamas’ activities in Judea & Samaria and in Turkey, they do now at least know that Hamas officials in Gaza like ice cream.

All four of these reports conclude with the same canard promoted by Hearing a month earlier in one of his radio reports from the Gaza Strip.

“And I have to say – and this is one of the oddest things – from the decrepit heart of a half-destroyed city in a besieged and blockaded enclave, sometimes described as the biggest open air prison in the world, comes the best ice cream I have ever tasted.” [emphasis added]

The Gaza Strip is of course not “besieged” at all and those who inaccurately describe it as “the biggest open air prison in the world” do so out of clear political motivations. Thousands of people exit and enter the Gaza Strip every year – as anyone who follows the daily reports publicized by COGAT online and on social media will be aware.

But, electing to ignore the facts behind the deliberate misnomer which he has so vigorously promoted over the past few weeks, Roger Hearing continues to mainstream the baseless rhetoric of anti-Israel delegitimisation in a style more suited to the Hamas supporting Palestine Solidarity Campaign’s PR department than a media organization supposedly committed to accurate and impartial reporting. The BBC is undoubtedly capable of identifying the motives and agenda behind the promotion of the inaccurate notion of Gaza as an ‘open air prison’. The fact that it chooses to adopt, amplify and repeatedly mainstream such propaganda on multiple platforms tells audiences all they need to know about the BBC’s supposed ‘impartiality’.

How to Complain to the BBC