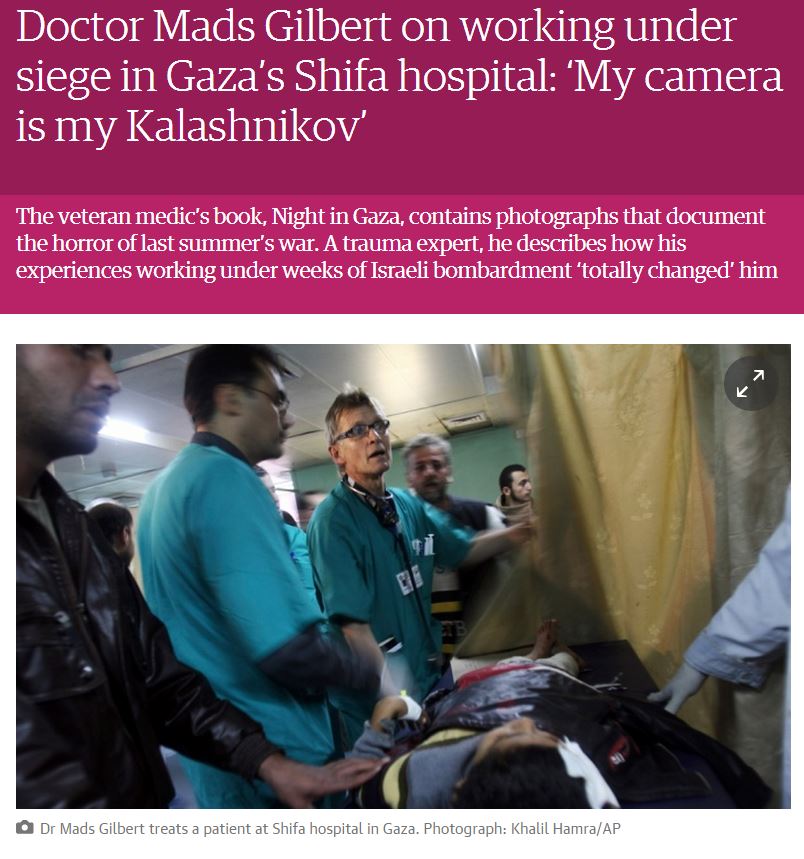 Here’s a glimpse of Sherwood’s take on Gilbert.

Gilbert – who describes himself as a “political doctor” and a practitioner of “solidarity medicine” – has written a book, Night in Gaza, which describes his time at the Shifa last summer. “It’s a place of human greatness, suffering and endurance – and an almost incomprehensible mastering of a situation that seems overwhelming, impossible to deal with. Yet they [the medical staff] stand tall, don’t reject a single patient, do phenomenal, very complicated surgery with a high level of professionalism,” he said.

When mass casualties were brought in, the first job of the medics was to take difficult decisions. “Triage is extremely efficient, but it’s brutal,” he said. “You have to let the dying die.” It was a marked contrast to hospitals in Norway, where medical resources would be thrown at patients with limited expectation of survival. Despite the harsh conditions at the Shifa, and the constant fear among the medics that they could find themselves treating their own relatives, they performed “world-class war surgery under world-class leadership”.

Gilbert is something of a hero to Palestinian sympathisers. Close to 1,000 tickets to a talk he gave last week in London sold out in four hours. But, inevitably, in the binary world of the Israeli-Palestinian conflict, he is feted by one side and abhorred by the other.

Of course, Sherwood doesn’t really tell readers why Gilbert is “abhorred” by some, so we’ll explain.

CAMERA provided some good background on Gilbert in 2009.

Gilbert is a radical Marxist and a member of the political Red (Rodt) party, a revolutionary socialist party in Norway. He has been a pro-Palestinian activist since the 1970’s and travelled to Lebanon in support of the Palestinians during the first Lebanon war in 1982. He has long been a vocal opponent of Israel and the U.S. Gilbert has acknowledged that he cannot separate politics from medicine, stating, “there is little in medicine that is not politics.” He even criticizes the group Doctors Without Borders for providing medical assistance to both sides in a conflict instead of taking a strong stance and supporting only one party. In a 2006 article in Nordlys, journalist Ivan Kristoffersen lamented the fact that Gilbert allows his humanitarian efforts to be politicized by his radical agenda…..Theextent of Gilbert’s political agenda and animus toward Israel and the U.S. is best evidenced by his radical support for the 9/11 terrorist attacks against the U.S.

CAMERA then cited an interview with the Norwegian daily, Dagbladet, shortly after the attacks, where Gilbert stated:

The attack on New York was not surprising, after the policy that has led the West in recent decades. I am upset over the terrorist attack, but am equally upset over the suffering which the United States has created. It is in this context that the 5000 dead people must be seen. If the U.S. government has a legitimate right to bomb and kill civilians in Iraq, then there is also a moral right to attack the United States with the weapons they had to create. Dead civilians are the same whether they are Americans, Palestinians or Iraqis.

When asked by Dagbladet if he supported the 9/11 attacks on the US, he replied: “Terror is a bad weapon, but the answer is yes, within the context I have mentioned“.

Additionally, in an op-ed in today’s Jerusalem Post, NGO Monitor President Gerald Steinberg addressed the issue of Gilbert’s radicalism and his “expert” role in the recently released UN report on the Gaza war.

The latest “report” on Israel produced by the UN Human Rights Council (UNHRC) includes a list of four “experts” with whom the two commissioners and their staffs consulted.

One of them is Dr. Mads Gilbert, a full-time propagandist from Norway who exploits medicine to promote hate.

Gilbert’s role as an expert tells readers (including the 47 member states of the UNHRC) all that they need in order to understand the absurdity of this exercise. In July 2014, during the Gaza war, he was one of the five co-authors of an infamous “open letter to the people of Gaza” published in the prestigious UK medical journal The Lancet.

Two of Gilbert’s partners on the letter promoted a blatantly anti-Semitic video by white supremacist and ex-KKK leader David Duke, but the doctor, who claims to promote morality, has not found time to comment. Gilbert has also “forgotten” to criticize the thousands of rockets launched from Gaza at Israeli civilians, every one a war crime. Instead, he rushes to Gaza when the IDF acts to stop these attacks, and joins the Hamas media campaign. Although he gave non-stop media interviews from Shifa hospital, he ignored missiles fired from the parking lot and evidence that Hamas was using the lower floors as its military headquarters (and torture chamber), knowing the Israel would not attack a hospital. Gilbert’s “expertise” notwithstanding, the UN Commission of Inquiry (COI) researchers were somehow unable to verify the evidence.

In response to Gilbert’s blatant form of ethical malpractice, 10 internationally renowned physicians published a letter in the Norwegian newspaper Verdens Gang calling his language on the 9/11 attacks and Hamas “extreme and disturbing,” concluding that “he exploits the medical profession to justify terrible violence.”

It’s extremely troubling that someone so extreme that he actually expressed support for al-Qaeda’s attack on thousands of innocent civlians is profiled in a major British newspaper in a manner which would leave readers with the impression that he’s just your everday ‘progressive’ political activist.