The news that Israeli naval forces had intercepted – without incident – the lead boat in the latest Gaza Strip bound flotilla was apparently deemed so important that on June 29th a report on that story was promoted on the BBC News website’s homepage, on its World page and on its Middle East page. 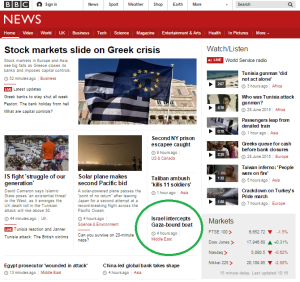 Unfortunately, the accuracy of some of the information included in that report – titled “Israel intercepts Gaza-bound boat” – was clearly less important.

“The Israeli Navy has intercepted a Gaza-bound vessel sailed by pro-Palestinian activists and diverted it to an Israeli port, the military says.

It says it acted in international waters to prevent the “intended breach of the maritime blockade” imposed since 2007 against the Hamas-run territory.”

However, as has been pointed out on these pages on numerous prior occasions, the naval blockade on the Gaza Strip was announced in January 2009 – not in 2007 as stated in this report and certainly not in 2006 – as claimed in another BBC report on the same topic posted on the BBC Arabic website.

The Turkel Commission report includes a detailed background of the circumstances leading up to the declaration of the naval blockade (from page 32 here) and states:

“In these circumstances, on January 3, 2009, during the operation Cast Lead, the Minister of Defense ordered a naval blockade off the coastline of the Gaza Strip up to a distance of 20 nautical miles from the coast. The significance of imposing a naval blockade according to the rules of international law is that it allows a party to an armed conflict to prevent entry into the prohibited area of any vessel that attempts to breach the blockade (even without it being established that the vessel is assisting terrorist activity). Consequently, a NOTMAR was published in the following terms: ‘All mariners are advised that as of 03 January 2009, 1700 UTC, Gaza maritime area is closed to all maritime traffic and is under blockade imposed by Israeli Navy until further notice. Maritime Gaza area is enclosed by the following coordinates […].”

In 2010 Professor Ruth Lapidoth noted that:

“In the treatment of the flotilla heading for Gaza, Israel has acted in compliance with international law because it has fulfilled all the conditions for a lawful blockade. In January 2009 Israel notified the relevant authorities of its blockade of Gaza – a lawful means of naval war. The existence of an armed conflict between Israel and Hamas in Gaza was well known and did not need a special declaration to that effect.”

The report of the UN SG’s Panel of Inquiry into the Mavi Marmara incident also notes on page 39 that:

“…the naval blockade was imposed more than a year later, in January 2009.”

Interestingly, at no point in these two BBC reports are readers informed that the UN panel found (page 44) the naval blockade to be legal and the relevant context of past cases of arms smuggling to the Gaza Strip by sea was not provided to readers, who were however told in the English version that:

“The activists said they wanted to draw attention to the blockade, which Israel says is a necessary security measure.” [emphasis added]

Another inaccuracy in this report (and in the Arabic version) is seen in the following statement:

“They said the vessel was carrying humanitarian aid, including medicine and solar panels.”

In fact, as blogger Elder of Ziyon pointed out over two weeks ago, the use of the plural term “panels” in that sentence is – according to a spokesperson for the flotilla organisers interviewed by Ma’an news agency – apparently superfluous.

“On board, the Marianne is carrying one solar panel to al-Shifa hospital and medical equipment for Wafa hospital, both in Gaza City. If everything goes as planned, activists will also leave the fishing trawler for Palestinian fishermen to use.

“The people in Gaza never have electricity all day long. Solar panels could be a sustainable solution for the power shortage,” Ighe said.” [emphasis added]

And, as our colleagues at Presspectiva have pointed out, Shifa hospital already has a working solar power system.

It would obviously have been helpful to readers of both the English language and Arabic language articles had they clarified the fact that there are no restrictions on the import of solar panels, medicines or any other kind of “humanitarian aid” into the Gaza Strip.

This of course is not the first time that audiences have been misled by BBC content with regard to the date of the implementation of the naval blockade or that the all-important context behind it has been omitted.