Promotion for Lyse Doucet’s programme ‘Children of the Gaza War’ – timed to be broadcast on the anniversary of the beginning of Operation Protective Edge on July 8th – has been appearing, inter alia, on the BBC News website and on social media. 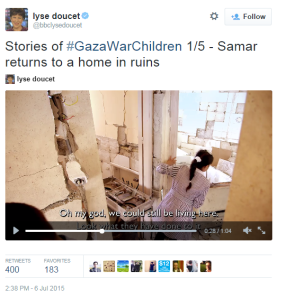 From the second of those Tweets from Lyse Doucet we learn that whilst the BBC was filming in southern Israel on July 16th 2014 it caught an incoming missile alert and the resulting scramble of two children to their home’s fortified safe room on camera. Insofar as we are aware, that footage was not shown to BBC audiences at the time.

Visitors to the BBC News website on July 5th found a filmed report by Doucet titled “Battle scars: Gaza children living with war’s legacy” and two days later a written report by Doucet also appeared in the ‘Features’ section of the website’s Middle East page under the headline  “The children scarred by war“.

Of the 1,086 words making up that article, two hundred and thirty-six can be categorized as background information. The Israeli children’s side of the story is told in two hundred and sixty words and five hundred and ninety words are devoted to the stories of Palestinian children. One can only hope that the upcoming programme itself will show better balance.

Among the notable aspects of Doucet’s written report is a curious focus on why her first interviewee was where he was when disaster struck.

“A week after the fighting began, Syed’s life was shattered on the day the 12-year-old, his 11-year-old brother Mohamed, and their six cousins went to Gaza’s beach to play football.

It was the natural playground for young boys from a family of fishermen which has lived off the sea for generations.

“We didn’t know that beach was dangerous,” says Syed – his eyes still, round, sad pools, as he remembers 16 July, one of the most harrowing days of the war.” [emphasis added]

Doucet makes no effort to inform readers that – as noted in the MAG report on the incident – the location was known to be a Hamas site and that prior events made the fact that it was dangerous clear.

“From the factual findings collected by MPCID investigators, it arose that the incident took place in an area that had long been known as a compound belonging to Hamas’s Naval Police and Naval Force (naval commandos), and which was utilized exclusively by militants. The compound in question spans the length of the breakwater of the Gaza City seashore, closed off by a fence and clearly separated from the beach serving the civilian population. It further arose in the course of the investigation (including from the affidavits provided to the MPCID by Palestinian witnesses), that the compound was known to the residents of the Gaza Strip as a compound which was used exclusively by Hamas’s Naval Police. The IDF carried out a number of attacks on the compound in the days prior to the incident. In the course of one such attack, which took place on the day prior to the incident (15 July 2014), a container located inside the compound, which was used to store military supplies, was attacked.”

Doucet even casts doubt on the nature of the site through her use of punctuation in the following sentence:

“An Israeli investigation said its air force mistook the children for Hamas fighters when a pilot fired twice at a “compound” next to the beach.”

In a video clip embedded into the article, Doucet tells audiences that the apartment she visits together with a girl called Samar “lies next to the main crossing with Israel”. That information would suggest that the area is in Beit Hanoun but Doucet makes no effort to inform viewers of the highly relevant context of the terrorist activity which took place in that district.

“Of the 3,356 missiles fired at civilian targets in Israel by terrorists in the Gaza Strip between July 8th and August 5th 2014, 69.4% were fired from the northern part of the territory with the towns of Beit Lahia and Beit Hanoun being major centres of missile fire, cross border tunnels and other terrorist activity.”

Without revealing the source of her claim, Doucet tells readers that:

“By the end of the 51-day conflict, 551 Gazan children had lost their lives.”

Throughout the past year, the BBC has repeatedly quoted and promoted casualty figures sourced from Hamas agencies and/or UN bodies relying on information from Hamas agencies and sympathisers. No independent BBC verification of the figures or of civilian/combatant casualty ratios has been made available to the public. Hence, BBC audiences cannot know whether or not the number quoted by Doucet includes child combatants, terrorists presented with false ages or even those killed by short-falling missiles fired by terrorist organisations such as the children killed in Shati on July 28th 2014.

Doucet’s article also includes promotion – including a link – of a very one-sided and context-free report from the political NGO ‘Save the Children’ which relates almost exclusively to children in the Gaza Strip and manages to avoid all use of the words terrorism or Hamas.

“A report released this week by Save the Children, A Living Nightmare, says the vast majority of children in the hardest-hit area still experience nightmares and bed wetting.”

The most remarkable part of Doucet’s article, however, is the following paragraph:

“Israel says its 2014 campaign, Operation Protective Edge, was launched to stop rocket attacks from Gaza and destroy a vast network of tunnels, some of which extended into Israeli communities. Hamas, which controls most of Gaza, said it was fighting against Israeli air strikes and incursions, and trying to ease severe restrictions on its crossings with both Israel and Egypt.” 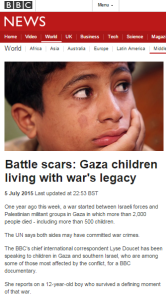 The BBC knows full well that Operation Protective Edge commenced after hundreds of missiles were fired by terrorist groups at civilian targets in Israel in the preceding weeks and following considerable efforts to persuade Hamas to stop those attacks. It also knows that thousands more rockets and mortars were fired during the period between July 8th and August 26th and what was the aim of the cross-border tunnels constructed by Hamas. It therefore has no justification for presenting that information with the qualifier “Israel says”.

Likewise, the BBC knows perfectly well that Israeli airstrikes were responses to missile fire on Israeli civilians and that the ground operation was necessary in order to decommission the cross-border tunnels. It also knows – even though it does not tell its audiences – that the border restrictions are the result of a decade and a half of terrorism by Hamas and other terror groups located in the Gaza Strip.

Doucet’s equivocal presentation of the background to Operation Protective Edge therefore does not represent an effort to meet editorial standards of impartiality but an active attempt to promote misleading ambiguity regarding the causes of the conflict.

One can only hope that a higher standard of journalism will be evident in the programme to be aired to UK audiences tonight on BBC Two and to viewers elsewhere this coming Saturday on BBC World News television.