In this series of posts we have already looked at how the JCPOA agreement between the P5+1 and Iran was framed by the BBC’s Middle East editor and its chief international correspondent on domestic and World Service radio programmes. In this post we will see an example of what viewers of BBC World News television learned – or not – about the deal’s essentials when presenter Babita Sharma interviewed Israeli minister Naftali Bennett on July 14th. 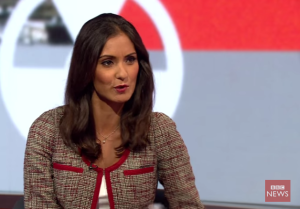 Bennett’s opening comments related to the problematic aspects of the deal’s verification mechanism, including the 24-day prior notice of inspections.

Bennett: “You cannot have verifiable inspections if you have to notify them in advance, if they can object and then there’s a committee. This is not serious.”

Sharma’s response to that point prompts the very obvious question of why the BBC bothered to invite Bennett for an interview in the first place.

Sharma: “You say it’s not serious but it is very serious. A deal has been done with the world’s major powers and Iran. Israel wasn’t there. It doesn’t really matter what you say about this because this deal has been done. It will be implemented.”

When Bennett tried to answer that point she quickly interrupted him.

Seventeen seconds into his reply she interrupted again.

Without even waiting for a reply she interrupted once more.

Sharma: “Let me just ask you though – forgive me for interrupting. I just want to ask on the point you’ve just said that you will prevent Iran from acquiring nuclear weapons. You’re echoing the words of Benjamin Netanyahu some hours ago saying that we did not commit to preventing an agreement but we commit to preventing Iran from acquiring weapons. What do you mean by that? It sounds like a threat of sorts. I mean what are you proposing here?”

Eight seconds into Bennett’s reply to that, Sharma yet again interrupted him.

Sharma: “But what does that mean? Now hold on a second. You’re quite happy…let me start over…you’re very happy to share with us your views about what’s not happening and how a deal isn’t right but you’re not able to tell us how you believe Israel is able to prevent Iran from acquiring nuclear weapons. So with statements like that issued into the public domain, what are we supposed to read from that if you’re not going to back it up with telling us exactly what you’re going to do?”

Did Ms Sharma and her producers really think that an Israeli minister was going to provide them with the intimate details of any plans relating to the Iranian nuclear programme? Of course not: the clue to why this exchange even took place is in the prior framing: “it sounds like a threat”. Forty-four seconds later Sharma continued her theme of an Israeli ‘threat’ by introducing a topic unrelated to the P5+1 agreement with Iran.

Sharma: “Let’s talk about the security and stability of what’s happening in the Middle East; in the region that you’re part of. Ehm…let me just begin by asking you – Israel; is it not the only country in the Middle East in 2015 that currently has a stockpile that’s capable of making up to eighty nuclear weapons? Is that correct?”

Fifteen seconds into Bennett’s reply to a question she knew in advance he was not going to answer Sharma interrupted once more.

Sharma: “Forgive me though, that’s not quite answering my question. The question was does Israel have…does Israel have a stockpile of nuclear weapons? Is it a yes or is it a no to that question?”

Sharma: “Does Israel have a stockpile of nuclear weapons?”

Eleven seconds after that she cut him off once more.

Sharma: “OK. Naftali Bennett I have to…Naftali Bennett I did ask you – and it was a simple yes or no – does Israel have the ability to make eighty nuclear weapons from its stockpile in 2015? Does it have that capability?”

Clearly the aim of this interview was not to provide BBC audiences with an understanding of Israel’s concerns about the JCPOA agreement. What Babita Sharma and her editorial team did however seek to do was to frame Israel as a greater threat to “security and stability” in the Middle East than the theocratic regime which has already breached its NPT obligations and sponsors terror throughout the region and beyond.

Unfortunately, such cringingly transparent ‘journavism’ no longer comes as a surprise to BBC audiences.