In addition to the written report (since slightly, but not significantly, amended) about the rioting on Temple Mount on July 26th which appeared on the BBC News website’s Middle East page and was discussed here, BBC television news audiences saw two filmed reports on the same topic.

Both reports also appeared on the BBC News website. The earlier one – by Mariko Oi – is titled “Palestinians and Israeli police clash at al-Aqsa mosque” and, like the written report, its synopsis misleads audiences on cause and effect, erasing the premeditated nature of the violence. 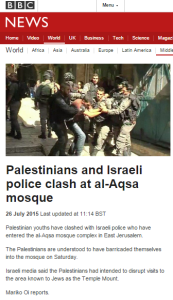 “Palestinian youths have clashed with Israeli police who have entered the al-Aqsa mosque complex in East Jerusalem.

The Palestinians are understood to have barricaded themselves into the mosque on Saturday.

Israeli media said the Palestinians had intended to disrupt visits to the area known to Jews as the Temple Mount.”

The filmed footage in that report does not show the rioting on Temple Mount at all. Nevertheless, Oi’s commentary is as follows:

“Palestinian youths have clashed with Israeli police at the Al Aqsa complex in East Jerusalem – one of Islam’s holiest sites. The Palestinians occupied the mosque on Saturday and Israeli police said they were planning to disrupt visits to the area which is also sacred to Jews, who call it Temple Mount. When police moved into the mosque they were hit by a barrage of stones. They then forced the Palestinians to back into the mosque and away from the area visited by Israelis.”

Once again this report fails to make any mention of the fact that a high volume of visitors to the Western Wall and Temple Mount was expected on that day due to the fast of Tisha B’Av. Like the written report, this one too leads audiences to believe that violence came as a result of the arrival of the police at the Al Aqsa mosque rather than the other way round.

Later on in the day, viewers of BBC television news programmes saw a second filmed report on the same subject – this time from Alan Johnston. Despite being headlined “Fighting flares at Jerusalem’s al-Aqsa mosque“, that film too includes no footage of the actual rioting on Temple Mount. Its synopsis on the BBC News website reads as follows: 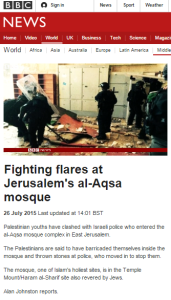 “Palestinian youths have clashed with Israeli police who entered the al-Aqsa mosque complex in East Jerusalem.

The Palestinians are said to have barricaded themselves inside the mosque and thrown stones at police, who moved in to stop them.

The mosque, one of Islam’s holiest sites, is in the Temple Mount/Haram al-Sharif site also revered by Jews.”

The opening lines of Johnston’s commentary suggest to viewers that the violence was sparked by Jews observing the fast of Tisha B’Av – which he neither names nor explains.

“Rage in the Holy City. Extreme tension in the alleyways in the heart of old Jerusalem. The trouble came as Jewish worshippers were being drawn into the area in large numbers; coming to gather here at the Western Wall to pray on a particularly significant day in their religious calendar.”

Johnston goes on to portray the premeditated violent rioting as “protest”:

“But up above there was trouble. According to the Israeli side there was a Palestinian protest at the Al Aqsa mosque.”

After a brief interview with the spokesman for the Israeli police force, Johnston continues his narrative whilst on screen viewers see still photographs from the scene.

“The police had forced their way into the entrance of this holy place, cleared barricades, then slammed the doors with the demonstrators inside.”

Although filmed footage of the rioting on Temple Mount on July 26th is available in the public domain, the BBC has chosen not to show it to audiences. The footage below – filmed by the Israeli police spokesman’s unit – shows the scenes which the above words from Johnston purport to describe.

Johnston closes his report as follows:

“Inevitably, the tensions up on the sacred site spilled into the surrounding neighbourhood. But it’s more than just religious feeling that gives rise to scenes like this. Decades of Israeli occupation fuels an endless, simmering frustration among Palestinians and that always feeds into this kind of violence in Jerusalem.”

Johnston’s messaging for BBC audiences is amply evident. In addition to the implication that this particular bout of violence was brought about because Jews went to pray “in large numbers”, viewers are clearly told that the problem of violence in Jerusalem in general is also caused by Israelis and their “occupation”.

According to Johnston’s narrative ‘frustrated’ Palestinians are devoid of any agency or responsibility and there is no room in his account for uncomfortable facts such as the racist hatred, incitement and glorification of terror regularly preached in the Al Aqsa mosque and others, propagated by official PA media and schoolbooks and promoted by Palestinian leaders. Neither does Johnston’s narrative include any mention of the female ‘guardians of the compound’ – paid by the Hamas-linked Northern Islamic Movement to harass non-Muslim visitors to Temple Mount – or of the paid rioters at the same site.

Johnston’s messaging is of course symptomatic of the BBC’s general approach to this issue. After the rioting on July 26th, Hamas issued calls for one of its ubiquitous ‘days of rage’ this coming Friday (July 31st). 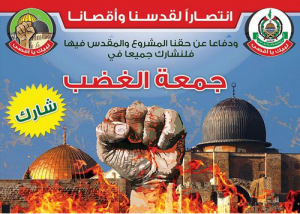 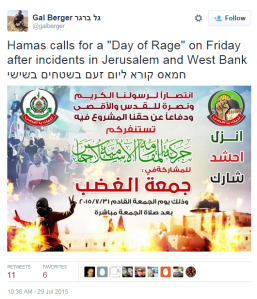 BBC audiences have of course been told nothing about that by the media organization supposedly committed to building “a global understanding of international issues”.