BBC coverage of the violent attack on six participators in the gay pride event held in Jerusalem on July 30th included: 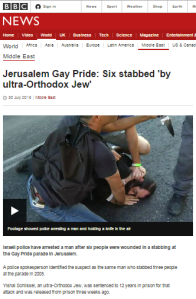 A filmed report for BBC television news which was also posted on the BBC News website under the title “Man held over Jerusalem Gay Pride stabbings“.

A written report on the BBC platform aimed at younger audiences – ‘Newsbeat’ – titled “‘We marched through blood at Jerusalem Gay Pride’“.

Towards the end of that latter report, in a section describing ultra-Orthodox opposition to the event and to the LGBT community in general, readers are told that:

“Israel’s homosexual community was the target of a 2009 attack in Tel Aviv, where a gunman opened fire at a centre for young gays, killing two people and wounding 15 others.

The assailant behind that attack was apprehended.”

The case referred to in those lines is the Bar Noar youth centre shootings. Once again, however, the BBC has obviously failed to keep up to date on the details of that case and hence misleads its audiences.

The suspect arrested and charged with the murders was later released when the case collapsed after the arrest of the state witness on charges of fabricating evidence and obstruction of justice. No further developments in the investigation have been publicized since then and no motive for that attack has been established in a court of law, meaning that the BBC’s implication of motivational linkage between that attack and the one which took place in Jerusalem on July 30th is at this stage no more than speculation.