Anyone searching for BBC coverage of the ten-year anniversary of Israel’s disengagement from the Gaza Strip would have been struck by the absence of content relating to that topic – until now.

On August 15th the BBC World Service radio programme ‘Newshour’ devoted just over five minutes (from 44:03 here) to a conversation between presenter James Menendez and journalist Anshel Pfeffer which was notable for its selective framing of the topic, its omission of vital context and the astounding fact that the word terrorism did not appear even once. 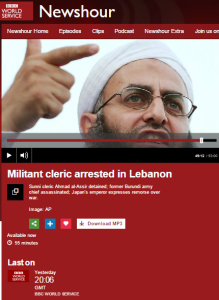 No historical context to explaining why Israel came to be in control of the previously Egyptian occupied Gaza Strip was evident in Menendez’s introduction but listeners did hear that region characterised as “Palestinian territory”.

James Menendez: “Now it’s exactly ten years since Israeli troops were sent into Gaza to evict settlers who’d refused to leave voluntarily. It was the culmination of then prime minister Ariel Sharon’s unilateral decision to withdraw from the Palestinian territory and pull out approximately eight and a half thousand settlers from the Strip along with the 3,000 troops needed to guard them. The surprise move drew both praise and some criticism at the time. So a decade later, how is it perceived in Israel? Anshel Pfeffer writes for the Israeli newspaper Ha’aretz. He’s also the Economist’s Jerusalem correspondent. I asked him first about the pull-out – completed in just a week – and the fact that in the end, there wasn’t much of a backlash.”

Anshel Pfeffer: “That’s very, very true and it was surprisingly quick, surprisingly painless in actual casualties. Obviously the ones who were being evacuated were deeply traumatised – and perhaps the community of settlers and right-wing groups who supported them – but the move proved to be very popular at the time amongst the Israeli public and I think it had 60 or 70% support within the Israeli public.”

That is the only mention of the thousands who lost their homes, communities and livelihoods and even had to exhume their dead: listeners learn nothing of what became of those people or how they have fared in the decade since the disengagement.  Pfeffer’s rather simplistic ‘for or against’ portrayal fails to reflect the trauma and emotional turmoil which gripped much of Israeli society at the time, including many who supported the move itself. Menendez continues:

JM: “And do you think there’s a similar level of support for that move now?”

AP: “No, I think the support has gone down. I still think there’s perhaps around 50% who’d think it was the right thing to do and there certainly is no groundswell of opinion saying Israel’s got to go back there again. But I think because of everything that’s happened  over the last ten years – the military operations, the missiles being fired from Gaza and the Israeli forces going back in again three or four times in ground incursions – I think that’s whittled away a lot of the support. But it’s also mainly because Israelis don’t see right now a credible alternative vis-à-vis the Palestinians; that lowers the support. I think one of the reasons Israelis ultimately did support the pullback ten years ago was Sharon, who was never seen as a left-winger – he was never seen as a pacifist or a limp-wristed politician. The fact that someone like that was saying ‘OK, we’re gonna have to pull back’ gave that a certain credibility among Israelis. And I think the same thing would happen today if a right-wing leader would say ‘OK, we’re gonna have to pull back from parts of the West Bank’, I think once again it would have a lot of support among Israelis, though today if you ask Israelis what they think they’re very sceptical that any pullback will result in calm and peace.”

Pfeffer fails to place the Gaza Strip disengagement within the context of the ‘land for peace’ principle and makes no mention of the pledges Israel received at the time from members of the international community concerning its post-withdrawal security. He is hence unable to adequately explain to listeners what effect the outcomes of that move (and Israel’s previous withdrawal from Southern Lebanon) – including the discovery that those international pledges were meaningless – had on the left-leaning Israeli public’s view of ‘land for peace’. That omission also hinders listener appreciation of the framing of Menedez’s next question. 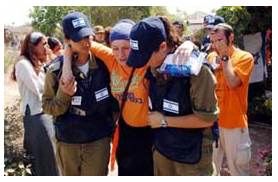 JM: “But if we’re dealing with the simple fact of whether it’s made Israel safer or not – which is it? Are Israelis safer in places like Tel Aviv?”

AP: “The answer is no because in the decade that’s passed the Hamas in Gaza has built a very impressive military infrastructure with missiles capable of hitting Tel Aviv. Even though the missiles aren’t very accurate and don’t carry devastating payload, it’s still something which didn’t exist ten years ago.”

In fact, terrorist groups in the Gaza Strip began staging rocket and mortar attacks in 2001 and so whilst Pfeffer’s claim that missiles capable of hitting targets in Tel Aviv did not exist ten years ago may be correct, Menedez’s framing of the question clearly has the effect of ultimately misleading listeners. The all-important context of Iranian patronage of Hamas’ military infrastructure is erased from audience view and no effort is made to provide crucial background information concerning the number of missile attacks which have taken place since August 2005 or the impact on the lives of the people living closer to the Gaza Strip than in Tel Aviv.

Pfeffer continues with a narrative of equivalence:

AP: “But the question is do you look at the actual disengagement as the cause of what’s happened or everything else that’s been happening in the last ten years? And I think that we have to look at the failure on both the Israeli and the Palestinian side to try and build a different kind of situation in Gaza as the main cause and not the pull back.”

Listeners would of course have benefited at this point had they received some information about Hamas’ ideology concerning the eradication of Israel, but that was not forthcoming and neither did they hear an accurate and impartial portrayal of Hamas’ violent take-over of the Gaza Strip. Menendez continues:

JM: “Hmm…and on that point, has it made Hamas – now in control of Gaza – stronger or weaker?”

AP: “Well it certainly has allowed them space to consolidate their own regime and the main Palestinian power – which is the Palestinian Authority controlled by Fatah – they don’t have any foothold in Gaza any more. So certainly Hamas is stronger within the confines of Gaza. It’s also isolated Hamas and made Hamas an organisation which has power in a pretty small place and that’s it. So you can look at it from either side.”

Failing to mention the years of PA initiated violence which preceded the Israeli decision to disengage from the Gaza Strip, Menendez continues:

JM: “I mean some at the time said it was a brave move because it might unblock what was a blocked peace process. I mean it hasn’t done that at all – has it? Because the peace process is going nowhere.”

AP: “Well it hasn’t done that because there was no follow-up. As you know Sharon slipped into a coma just four months after the pullback and after that Israel had a deeply unpopular president, Ehud Olmert, who was mired both in corruption and in a disastrous war up north in Lebanon and since then we’ve had six years of Binyamin Netanyahu who hasn’t really gone ahead. And the same thing’s happened on the Palestinian side. We’ve seen a split between Fatah and Hamas which hasn’t allowed the Palestinians really to get their act together and the pullback from Gaza could certainly have unblocked that process but everything that’s happened in the ten years since has basically wasted the momentum that could have been created by the pullback.”

Ehud Olmert was of course Israel’s prime minister – not president – and Pfeffer fails to inform audiences that not only was he elected on a platform which included further Israeli disengagement from Judea & Samaria, but that he made an unprecedented offer to the Palestinians in 2008. Likewise, no mention is made of Netanyahu’s ten-month construction freeze in Judea & Samaria – aimed at drawing the PA to the negotiating table – or the ‘goodwill gesture’ of the release of dozens of terrorists during the negotiations in 2013/4 which Mahmoud Abbas scuppered by forming his ‘unity government’ with Hamas. Of course to inform audiences of such facts would have severely jeopardised the narrative of equivalence so cosily promoted by this conversation’s partners.

Menendez then comes up with the following ‘question’, making no effort to inform listeners that the partial blockade was implemented because of Hamas terrorism:

JM: “And some would say an occupation has been replaced by a pretty tough blockade of the Gaza Strip. Are Israelis happy about that?”

AP: “It’s not about they don’t care. It’s…Gaza’s been such a trauma for Israelis. Whether it’s the missiles being fired, whether it’s the pullback, whether it’s the years before that in which the occupation in Gaza was  a rather expensive – in casualties probably more than in money – operation and Israelis said OK we’re going to get out of Gaza and Gaza will somehow do its own thing. What has happened is that neither side has seemed capable of creating any kind of neighbourly relations and also you have to remember that Egypt also plays its…ahm….very ruthless game towards Gaza so it’s remained there, like you say, isolated under blockade and neither side seems capable or really willing to try and find a way out of it.”

Listeners might of course have considered that acts such as providing medical treatment for Palestinians from the Gaza Strip, supplying goods, humanitarian aid and electricity and aiding Gazan farmers and businessmen are very “neighbourly” indeed – had they been told that such things exist.

It takes quite some doing to turn a story in which Israel evacuated thousands of people from their homes and turned over an area to the control of the Palestinian Authority – only to see a dramatic increase in terrorist attacks inside its recognised boundaries – into a narrative of equivalent blame. James Menendez and his guest however managed to pull that off quite spectacularly with the aid of omission of facts, erasure of context, selective framing and an obviously politicised agenda.