The Independent’s Yasmin Alibhai-Brown doesn’t check facts. In 2012 she defended British politician Jenny Tonge. Baroness Tonge had declared in a talk to students that “Israel won’t be here forever in its present performance” for which Tonge was eventually forced to resign from the Liberal Democrats which supports a two-state solution.

When considering the context of her talk Tonge had obviously meant that Israel won’t last because it, in her view, behaves badly. But Alibhai-Brown, like some other lazy commentators who didn’t check my clip, wrote that Tonge had simply said “Israel won’t be here forever in its present form”, which would have been defensible because countries do change form (see Ukraine and Russia). The Independent eventually had to change the wording of Alibhai-Brown’s article to reflect Tonge’s actual quote.

Now, in her latest Independent article Alibhai-Brown criticises those who accuse Jeremy Corbyn of being “an anti-Semite”, but she offers no evidence that Corbyn has been so accused by any serious commentators. She obliquely accuses “The Jewish Chronicle, some MPs and various sections of the media”. But the JC has merely reasonably asked Corbyn to answer for his dubious support for Hamas, Hezbollah, Stephen Sizer, Paul Eisen and Raed Salah,

In fact the opposite is often true. James Bloodworth has raised similar concerns to the JC about Corbyn but goes out of his way to write “I genuinely believe that Corbyn does not have an antisemitic bone in his body…”

And Alibhai-Brown continues her manner of parading Jews who reject Israel as “conscientious and ethical”. In yesterday’s article these two people are the late Mike Marqusee and Ken Loach. At a meeting she chaired in 2012, in which the ex-BBC journalist Tim Llewlynn claimed that “Zionists are scattered at strategic points throughout British business”, Alibhai-Brown told the audience that Professor Hugh Blaschko had complained to her that “Israel will bring the worst out in us Jewish people.”

It’s a shame that Alibhai-Brown attaches so much respect to the likes of Marqusee, Loach and Blaschko by dint of their Jewishness. Is she really saying that Jews supportive of Israel, the vast majority, are unethical? That’s the sad implication from someone who should be concerned with racial harmony considering her forced flight from her homeland of Uganda.

And no Jew has a problem with Loach for being “a fierce defender of Palestinian rights”. The problem Jews have with Loach is that, just like Jeremy Corbyn, he seems to want the only Jewish state finished, destroyed, dead. Most reasonable people don’t see that as a “conscientious and ethical” position.

But the most telling part of her article is about Carlos Latuff. It seems that either she just doesn’t understand anti-Semitism or that she prefers to turn a blind eye to it.

True to form she looks for a Jew or a Jewish organisation that supports the view that Latuff’s cartoons are not anti-Semitic. On Latuff’s Wikipedia page she finds “the Jewish daily Forward” mentioned. You won’t be surprised to learn that, once again, Alibhai-Brown has not checked facts. As Honest Reporting reports this is not the view of the Forward itself but of one Forward commentator, Eddy Portnoy, in his book review about anti-Semitic cartoons for the Forward. Honest Reporting continues:

“Portnoy’s statement is the one and only reference on Latuff’s Wikipedia page that opposes the consensus view of Latuff by many Jewish organizations and experts that the cartoonist is, indeed, anti-Semitic.”

Alibhai-Brown raises Latuff because she says Corbyn “shared a platform” with him. I am not aware that this is true although we know that Corbyn was due to share a platform with Latuff next weekend but has since pulled out. Maybe Corbyn has finally re-evaluated Latuff’s work.

How can any supposed reasonable commentator, Portnoy aside, consider someone’s work which compares the plight of the Palestinians to the plight of the Jews in the Warsaw Ghetto and Auschwitz as anything but anti-Semitic. The Guardian’s Ian Black accuses Latuff of “drawing, without inhibition, on judeophobic stereotypes in the service of the anti-globalisation movement.”

Corbyn, by cancelling his appearance alongside Latuff, has possibly understood these objections to Latuff’s work while Alibhai-Brown carries on blissfully unaware.

So the main question for Alibhai-Brown is: Would you really not consider it tantamount to religious or racial hatred if the most horrendous massacre of Muslims, possibly at Srebrenica, possibly by ISIS, was portrayed in a manner similar to the way that Latuff portrays the Holocaust?

If Alibhai-Brown responds we will let you know. In the meantime here are some examples of Latuff’s work: 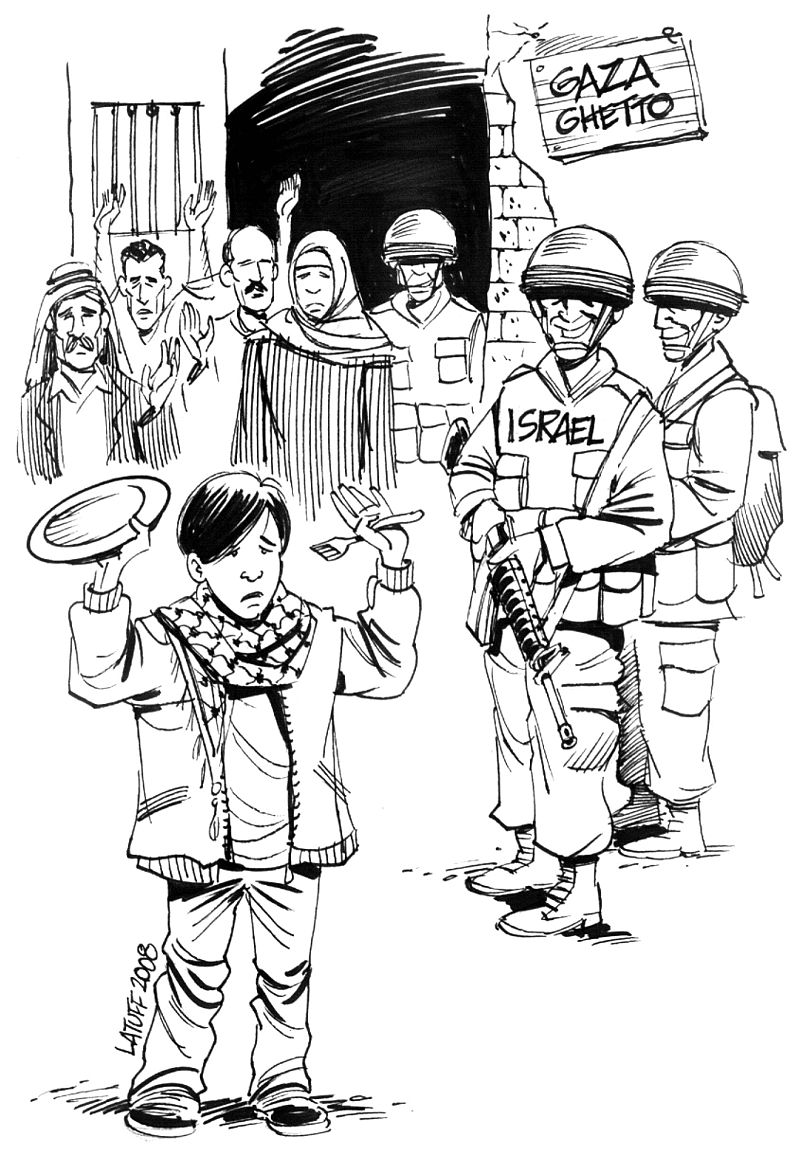 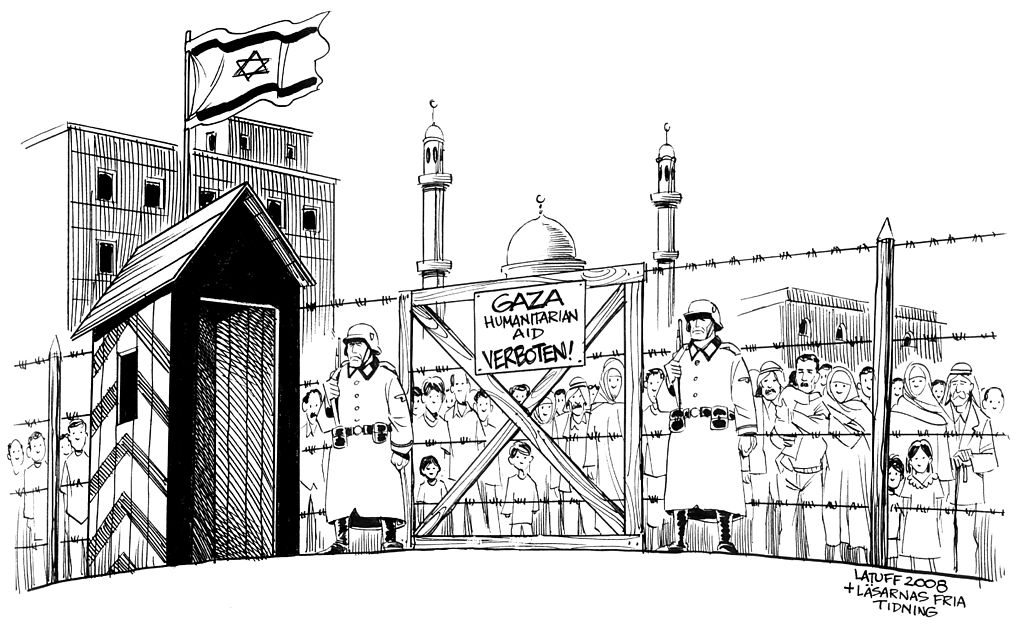 And some more here