The UK Telegraph and Daily Mail retreat from a story about alleged Israeli brutality towards a Palestinian child, recognizing that the players in question have a history of manipulating journalists in Nabi Saleh.

As noted by CAMERA’s Tamar Sternthal, the Palestinian town of Nabi Saleh, near the Jewish community of Neveh Tzuf , is “where photographers gather every Friday to document repetitious scenes of Palestinian residents and international activists clashing with Israeli soldiers” and where activists often place their children in danger to score propaganda points.

Nabi Saleh’s most popular Pallywood child star, known as “Shirley Temper” (aka Ahed Tamimi), revived her recurring role as the symbol of Palestinian “resistance” on Friday, when she was seen attacking an Israeli soldier who had detained a rock-thrower during protests.

Ahed is the daughter of Narimen and Bassem Tamimi, prominent activists in the Popular Resistance who evidently determine the girl’s protest “strategy”. As Sternthal noted, “rather than keeping their children at a safe distance from the often-violent clashes, the parents encourage their children to play highly visible roles in the confrontation with the army.”

Here’s a photo of “Temper” from 2012, seen with her fist raised at an Israeli soldier. 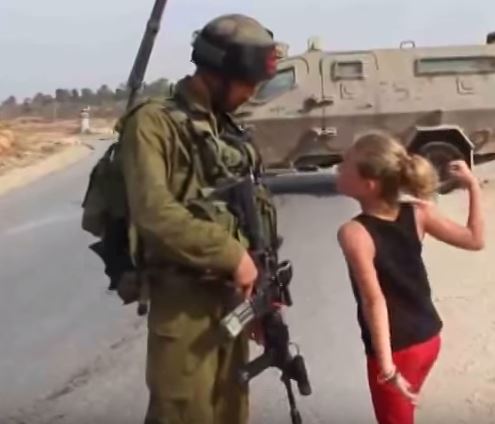 In the latest incident, “Temper” is one of several Palestinian civilians who attack a soldier in an attempt to prevent the arrest of a 13-year-old rock thrower.

Here’s a clip from the Pallywood production. (The term “Pallywood” refers to the staging of scenes by Palestinian journalists in order to present the Palestinians as hapless victims of Israeli aggression.)

What arguably stands out most about this video is the restraint shown by the Israeli soldier.  He was shoved, hit and bitten and yet maintained his discipline throughout the incident until a commander called off the detention, citing the escalating violence.

Additionally, others may have missed the telling fact that the boy detained for throwing rocks, Muhammad, is the brother of “Shirley Temper” (Ahed).

Here’s the caption for the photo of the Tamimi family from Getty Images:

The Daily Mail initially ran with the desired Pallywood tale of cruel Israeli soldiers attacking innocent Palestinian children, but later changed the headline and tone of the piece, presumably after a myriad of complaints. Remarkably, the DM’s revised headline explained that the girl had “been revealed” as a Pallywood star.

But, even more interesting is what occurred at The Telegraph, which initially ran with the headline ‘Palestinian women wrestle Israeli soldier off injured small boy’, but later pulled the entire story from their website.

Here’s a screenshot of the Telegraph story, written by David Millward, as seen in a Google search:

However, when you try to open the link, the following appears:

(Their Tweet to the article has still not been deleted)

Though we weren’t able to find a cached version of the story, we did locate the text from Lexis-Nexis. As you can see, it completely bought into the Pallywood tale.

An Israeli solider [sic] who held pinned a Palestinian boy whose arm was in a sling to the floor at gunpoint was set upon by a young girl and two women.

The sight of the terrified child being held at gunpoint was too much those watching to bear.

A young girl sank her teeth into the balaclava-clad soldier’s right hand, forcing him to release his machine gun.

At one point the soldier shoves his hand into the girl’s face.

Two women, meanwhile, grabbed the soldier by the neck and soldier, succeeding in hauling him off the frightened young boy.

The soldier eventually fled and the boy was cradled in the girls arms.

What triggered the clash is unclear, though tension has been increasing between Palestinians and the Israelis in the area and it is not unknown for young children to throw stones at the occupying forces.

The Palestinians have been protesting at the confiscation of their land to enable the expansion of the Jewish Hallamish settlement at Nabi Saleh on the West Bank.

Thus far, neither the Guardian nor Times of London have covered the incident.

Though Channel 4 News, The Independent and the tabloid Daily Mirror have reported it, and largely followed the Pallywood script (the latter going with the headline ‘West Bank Freedom Biter’), it’s nonetheless significant in the context of the British media’s institutional pro-Palestinian bias that both the DM and Telegraph retreated after initially parroting the desired Palestinian narrative.