Although this report is about the closure of an inquiry opened three years ago in August 2012 after Suha Arafat filed a civil suit at a court in the Paris suburb of Nanterre claiming that her husband had been murdered, the caption to the main photograph illustrating the English language article continues to infer foul play. 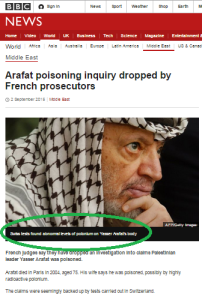 That theme is also promoted in the body of the report:

“Arafat died in Paris in 2004, aged 75. His wife says he was poisoned, possibly by highly radioactive polonium.

The claims were seemingly backed up by tests carried out in Switzerland.”

Later on readers are informed that:

“Three teams of French, Swiss and Russian investigators were allowed to take samples from Arafat’s tomb in Ramallah.

But, earlier this year, one French prosecutor said the polonium samples were of an environmental nature.”

Readers are not told that the Russian investigation also ruled out poisoning.

As we know, the BBC’s editorial guidelines state that its content must achieve both “due accuracy” and “impartiality over time“. The BBC’s coverage of this story over the past three years presents an opportunity to examine its adherence to those editorial standards.

The story began in July 2012 when an Al Jazeera ‘documentary’ claimed that Swiss experts had found “significant” traces of Polonium 210 on some of Arafat’s personal effects provided by his widow.

In August 2012 Suha Arafat filed her suit in Paris and BBC coverage at the time informed audiences that:

“…many Palestinians continue to believe that Israel poisoned him. Israel has denied any involvement.”

In November 2012 Arafat’s remains were exhumed. The BBC’s Jon Donnison had already prepared the scene with two reports on Arafat’s ‘legacy’ – here and here – and a filmed item in which he promoted the notion that Arafat was “killed at the hands of Israel”. Additional filmed and written coverage by Richard Galpin also promoted the PA’s conspiracy theory of Israeli involvement in Arafat’s death. The exhumation itself prompted no fewer than five reports on the BBC News website’s Middle East page, three of which again promoted conspiracy theories about Israel.

A year later, in November 2013, the appearance of a Swiss report with findings described as “moderately” supporting the poisoning theory prompted the BBC news website to produce no fewer than thirteen different reports, nine of which amplified conspiracy theories concerning Israel’s involvement in Arafat’s death.

In December 2013 a leaked French report stating that Arafat was not poisoned was covered in two reports on the BBC News website, both of which included repetition of Palestinian conspiracy theories which accuse Israel of being responsible for Arafat’s death.

Later on in December 2013, the Russian team also announced that its findings ruled out foul play and that news was covered in one report on the BBC News website, which again promoted Palestinian conspiracy theories concerning Israel. By this time the website had promoted four times more reports promoting the Swiss report which “moderately supported” the poisoning theory than it had devoted to the French and Russian findings which determined that Arafat died of natural causes.

In January 2015 the BBC’s flagship interview programme ‘Hardtalk’ produced a special programme to “mark the anniversary” of Arafat’s death in which Suha Arafat was provided with a platform to further promote the notion that Arafat was murdered.

In March 2015 French experts officially announced that they had ruled out foul play and that “the polonium 210 and lead 210 found in Arafat’s grave and in the samples are of an environmental nature”. There was no coverage of that announcement on the BBC News website.

In July 2015 the French prosecutor “said there is no case to answer regarding the death of Palestinian leader Yasser Arafat”. The BBC News website’s one report on that announcement promoted the ‘Israel killed Arafat’ conspiracy theory no fewer than three times.

In August 2015 the BBC found it appropriate to rebroadcast its January 2015 ‘Hardtalk’ interview with Suha Arafat despite the fact that it was obvious that the case was heading towards closure.

In this latest article concerning the French authorities’ decision to close the case from September 2015, the Swiss results are once again promoted as noted above.

So has the self-styled “standard-setter for international journalism” covered this story with “due accuracy” and “impartiality over time”? Well, for a start, the fact that the BBC’s backgrounder on the topic has not been updated since December 2013 does not enhance the impression of commitment to accuracy.

The repeated – if not obsessive – amplification of a baseless conspiracy theory even after two teams of experts had ruled that Arafat died of natural causes certainly cannot be said to contribute to the impression of accuracy in BBC reporting and licence fee payers may well be asking themselves how the BBC can possibly justify the use of resources, air time and column space to repeatedly propagate fact-free myth-cum-folklore and why it has spent three years lending an air of plausibility to this particular conspiracy theory.

As for impartiality, the volume of coverage of the Swiss results which “moderately” supported the poisoning theory has clearly been much greater than the BBC’s reporting on the results produced by the other two teams and their continued amplification even in this latest report suggests that “impartiality over time” was not a priority in coverage of this story.