A September 24th edition of the Guardian ‘Corrections and Clarifications’ included the following entry:

An article about a meeting between Binyamin Netanyahu, the Israeli prime minister, and Vladimir Putin, the Russian president, to discuss security concerns along Israel’s northern border referred to “the Golan Heights, bordering Syria”. The Golan Heights are in fact part of Syria, but have been occupied by Israel since 1967 (Israel and Russia discuss Syrian civil war, 22 September, page 17).

We’re so glad Guardian editors responded to a complaint from someone (Bashar al-Assad or his propaganda minister, perhaps?) evidently concerned that readers may have gotten the wrong impression concerning rightful possession of the border territory.

Of course, since the fall of the Ottoman Empire, three independent countries have ruled Golan: France, Syria and Israel – and Israel’s possession (at 48 years) has now lasted  more than twice as long as Syrian control (21 years).

But, leaving aside the question of possession and rightful ownership, can anyone seriously argue it would be in the interest of the region if Bashar al-Assad – the butcher of Damascus – resumed control of the territory?

After five years of a civil war that Middle East analyst Jonathan Spyer suggests could become a “frozen conflict” (a war which continues to smolder without resolution), Assad’s shrinking “country“ now consists merely of much of the western coast. 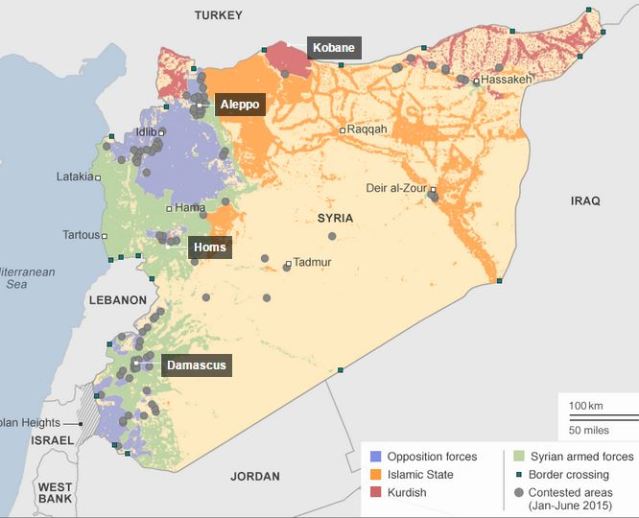 While nobody can predict what the boundaries will look like in the long-term – though Russia’s increased military presence and Iranian support suggests Assad could hold on to his small patch of land for a long time – it would be hard to find many serious observers who could make the case that expanding Syria’s territory would stem the bloodshed in a war that has claimed over 200,000 lives.

Though modern “Syria” (carved out of the old Ottoman Empire by European powers during the Sykes-Picot Agreement) has already essentially ceased to exist, we wonder how the Guardian would refer to Golan if, one day, Assad is forced to flee and his forces abandon the territory they now control, and some combination of foreign powers and jihadists assume control.

In other words, will Israel still be “occupying” Golan even after the previous recognized sovereign power no longer exists?

Well, considering Jordan’s 1988 relinquishing of control of the West Bank didn’t change political perceptions of Israeli control of the ancient Jewish land, don’t expect the international community (or Guardian editors) to “award” Golan to Jerusalem no matter which coalition of brutal extremists ultimately triumph and take possession of the territory now called Syria.