BBC News website reporting of the terror attacks which took place in Israel on October 12th appeared in an article currently headlined “Jerusalem attacks: Israelis wounded in fresh stabbings” which was updated and retitled throughout the day as news of more attacks broke. 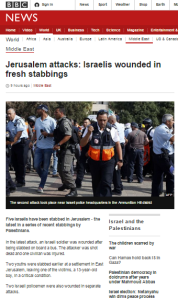 Among the four attacks which took place on that day in Jerusalem was one in the Pisgat Ze’ev neighbourhood.

“A 13-year-old Jewish boy from Pisgat Ze’ev is in critical condition Monday after being stabbed nearly a dozen times by two teenage Palestinian terrorists in Jerusalem’s Pisgat Ze’ev neighborhood, marking the third terrorist attack in the capital in six hours.

“Both terrorists stabbed the boy many times all over his body before a driver neutralized the 13-year-old terrorist by ramming his car into him,” said Rosenfeld. “The other assailant then stabbed a 24-year-old Jewish man nearby before being shot dead by police.””

According to media reports, the victims of the attack are still in critical condition.

Initial BBC News reporting on the incident read as follows:

“Police said two youths were stabbed by two assailants in the Pisgat Zeev district, one of whom was shot dead and the other shot and wounded. […]

Two Israelis aged 16 and 20 were seriously injured in the attack in Pisgat Zeev, the Magen David Adom ambulance service said.”

In the next version of the report, the description of the location of the attack was changed.

“Police said two youths were stabbed by two assailants – one of whom was shot dead and the other wounded – in a Jewish settlement in East Jerusalem. […]

Two Israelis aged 16 and 20 were seriously injured in the attack in the settlement of Pisgat Zeev, the Magen David Adom ambulance service said.”

The version after that corrected the age of the younger victim.

“Police said two youths were stabbed by two teenaged assailants – one of whom was shot dead and the other wounded – in a settlement in East Jerusalem. […]

She identified the two assailants as 13- and 17-year-old Palestinians from nearby Beit Hanina.

According to police, the pair stabbed the 20-year-old, seriously wounding him, before attacking the 13-year-old boy, who was riding a bicycle, critically wounding him.”

The final version of the report was again amended and now reads as follows:

“Two youths were stabbed earlier at a settlement in East Jerusalem, leaving one of the victims, a 13-year-old boy, in a critical condition. […]

One of the Palestinian attackers of the two youths in the Pisgat Zeev settlement was shot and killed by police. His 13-year-old accomplice was shot and seriously injured.

There is of course nothing novel about the BBC’s description of the Jerusalem neighbourhood of Pisgat Ze’ev as a “settlement in East Jerusalem”; audiences have seen that politically motivated narrative amplified many times before, together with the standard BBC mantra “settlements are considered illegal under international law”.

But it is nevertheless remarkable that a BBC priority in its reporting on a heinous terror attack (of course not named as such) on a young boy riding his bike was to ensure that readers understood that the location of the attack is a place where – according to the BBC’s adopted narrative – Israelis really should not be.

Equally remarkable – though predictable given the corporation’s record to date – is the fact that the reckless use of this attack for the promotion of falsehoods and incitement by a spokesman for the Palestinian Authority was completely ignored by the BBC.