As well as being broadcast on BBC television news programmes, an abridged version of that interview was promoted separately on the BBC News website under the title “Israeli occupation is ‘abnormal, cruel and lethal’” and embedded into a written report titled “Palestinian rioters torch Jewish holy site Joseph’s Tomb“. 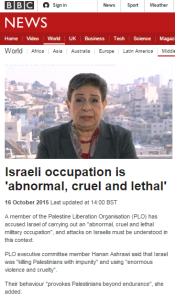 In addition to blaming Israelis for the terror attacks against them, Ashrawi used her BBC platform to promote blatant falsehoods which are at the root of the Palestinian incitement fueling the current wave of terrorism.

“…and the latest escalation is that they change the status quo of the Al Aqsa Mosque – of Haram al Sharif – and again they have blocked off Jerusalem for all Palestinians. No Palestinian West Banker or from exile or from Gaza can get to Jerusalem and they have managed to provoke every single Palestinian – Muslim, Christian or otherwise – by carrying out such draconian measures.”

Both the abridged versions appearing on the BBC News website end at that point and so audiences are left with the materially misleading impressions promoted by Ashrawi. Only those who happened to see the full report heard Lyse Doucet’s half-hearted ‘challenge’ to Ashrawi’s falsehoods and her provision of a lead for yet more propaganda.

Doucet: “Hanan Ashrawi; you mention the status quo, which is a very sensitive issue. Israeli leaders say they have not changed the status quo – that is, that Palestinians can pray at the Al Aqsa Mosque, that Jews can visit the Temple Mount but they’re not allowed to pray there. They say that they haven’t changed it. You’ve seen otherwise?”

Ashrawi: “Of course. I mean we don’t need to listen to Israeli fabrications and fiction because we deal with reality – we look at what’s happening on the ground. Certainly they have changed the status quo. Certainly they have changed even the physical surroundings. They have dug beneath the mosque and el Haram Sharif. They have repeatedly prevented Palestinians from entering the mosque. They have put restrictions on the age of men and women who can enter the mosque. This is supposed to be a place of worship open to everybody. They’ve prevented Palestinians without Jerusalem IDs – which means all West Bankers and Gazans – from entering Jerusalem as a whole. Where is freedom of worship? And they’ve also transformed the Haram Sharif. So let’s talk about illegal annexation, let’s talk about changing the character, the culture, the history, the narrative of the place. And then let’s talk about provocation. This is what is happening.”

Changing the subject, Doucet makes no effort to challenge that chapter in Ashrawi’s volume of lies and distortions. She fails to clarify to audiences that any age restrictions on men (not women, as stated by Ashrawi) visiting the site are directly linked to security issues and that Palestinians from PA controlled areas and Gaza can get permits to visit Jerusalem but that the PA has reportedly failed to cooperate with such initiatives in the past. She also fails to make it clear to audiences that only on very rare occasions has the mosque been closed due to extreme incidents of Palestinian violence and that Ashrawi’s false claims are refuted by the fact that there were 3.5 million visits by Muslims to the site last year, compared to 200,000 by Christians and just 12,500 by Jews. Doucet also fails to challenge Ashrawi’s pernicious – and downright dangerous – falsehoods concerning the physical site itself which are part and parcel of the very long history of a libel used for the purpose of incitement.

Understanding what the status quo on Temple Mount is – and is not – is crucial to audience comprehension of this latest wave of terrorism and wider issues. Doucet’s widely promoted report not only fails to contribute to such comprehension, but materially misleads BBC audiences on the topic by allowing (not for the first time) an inadequately challenged platform for yet more Palestinian incitement.