In recent weeks inaccurate and misleading information concerning Temple Mount has been promoted on a variety of BBC platforms. On domestic and worldwide radio, as well as on television and the BBC News website, audiences have been led to believe that the entire Temple Mount is ‘al Aqsa Mosque’ and that the site (which has religious significance to all three Abrahamic religions) is exclusively “Islamic” or “Muslim”.

The latest example of promotion of inaccurate information relating to that topic came in a new BBC World Service radio programme called ‘The Cultural Frontline’ which, listeners are told, is “the line where arts and news collide”. 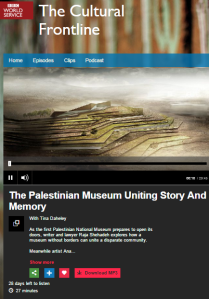 The first item in the first episode of that new show was devoted to a monologue by BBC regular Raja Shehadeh on the topic of “the first Palestinian National Museum”. That item (available from 00:55 here) was introduced by presenter Tina Daheley as follows:

“Our first stop is a place that’s been fought over for decades. We’re heading to the Middle East where tensions over control of a Jerusalem mosque have triggered serious violence in recent weeks.” [emphasis added]

Obviously, for there to be “tensions over control of a Jerusalem mosque”, more than one party must be seeking to control that mosque and that, of course, is not an accurate representation of the situation. Not only does Israel have no interest in seeking “control” of al Aqsa Mosque, but it has repeatedly stated that it will continue to uphold the status quo whereby that building and the wider area of Temple Mount is under the administrative control of the Jordanian Waqf.

But not only does Daheley’s claim materially mislead listeners by providing them with an inaccurate explanation for the surge in violent rioting and terrorism; it also conceals their real cause – and agenda – by diverting listeners from the incitement based on conspiracy theories concerning al Aqsa Mosque which really does underpin that “serious violence”.

Let’s hope that future programmes in this series will pay more attention to the importance of accurate terminology.