Over the past few weeks BBC audiences have been repeatedly told that the current wave of terrorism in Israel is characterized by “lone wolf attacks”. For example:

“This amateur video was filmed in the Old City last Saturday. The distant screams are from an Israeli woman whose husband had just been killed in a lone wolf knife attack.” (Orla Guerin, BBC television news, October 9th 2015)

“It is proving a struggle to prevent the sporadic lone wolf attacks by young Palestinians. These have been motivated by deep anger over access to al-Aqsa Mosque and the current political situation. There is a danger that a heavy-handed Israeli police response could exacerbate the situation.” (Yolande Knell, BBC News website, October 9th 2015) 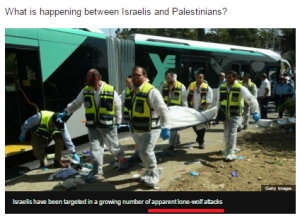 That description conceals the links of some of the perpetrators of recent attacks to terrorist groups such as Hamas and the Palestinian Islamic Jihad. It also ignores the fact that whilst some of the individual terrorists may indeed have operated outside an organised command structure, they did not act within a vacuum.

A very interesting essay titled “What Do Palestinians Want?” by Daniel Polisar at Mosaic magazine provides insight into the backdrop to the current wave of terror.

“Absent almost entirely from this discussion has been any attempt to understand the perspective of everyday Palestinians. Yet it is precisely the climate of public opinion that shapes and in turn is shaped by the declarations of Palestinian leaders, and that creates the atmosphere in which young people choose whether to wake up in the morning, pull a knife from the family kitchen, and go out in search of martyrdom. Whether commentators are ignoring the views of mainstream Palestinians out of a mistaken belief that public opinion does not matter in dictatorships, or out of a dismissive sense that they are powerless pawns whose fate is decided by their leaders, Israel, or regional and world powers, the omission is both patronizing and likely to lead to significant misunderstandings of what is happening. In this essay I aim to fill the lacuna by addressing what Palestinians think both about violence against Israelis and about the core issues that supply its context and justification. […]

Though they may be lone wolves in the technical sense of not belonging to an organizational command structure, they are anything but alone within their communities. To the contrary, they are surrounded by people who share many of their core beliefs, who justify the attacks they are carrying out, who see their actions as potentially valuable in furthering Palestinian goals, and who can be counted on to venerate them and their families.”

The full essay – which addresses issues conscientiously and consistently avoided by BBC correspondents confined to reporting within a very specific narrative – can be found here.