Sandra White is a Scottish National Party MSP for the Glasgow Kelvin constituency, and is reportedly the most active MSP in lobbying for pro-Palestinian and anti-Israel positions.

The SNP was recently forced to apologize after White retweeted an antisemitic image originally posted by an ‘activist’ (Charles Edward Frith) with a history of antisemitic tweets. 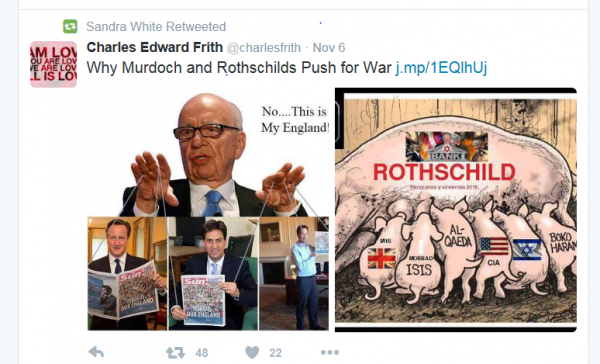 The image to the right (enlarged here), noted the CST, “derives from American neo-Nazi websites” and represents “one of the most commonly used antisemitic cartoons in US neo-Nazi circles.”

Additionally, as UK Media Watch noted on Twitter in response to the ‘apology’ by the SNP and White, this isn’t the first time she’s retweeted Frith.

Additionally, it turns out that this retweet by White claiming to show a little girl forced to cool off in a bucket of cold water, likely isn’t from Gaza. It appears to be an image actually depicting a child from one of the Kurdish tribes in Iraq.

The Slemani Times is an English language news publication covering the Kurdish region in the Middle East – and their tweet dates back to July 31, more than a week before the image began appearing on pro-Palestinian social media sites.

Further, White retweeted the following tweet from a former Hamas minister which advances the lie that the 13-year-old Palestinian boy (Ahmed Mansara) seen on the right – who admitted to stabbing a 13-year-old Jewish boy – was “assasinated” by Israeli forces.

Of course, the boy was injured after being hit by a car while fleeing the scene of the attack, and not killed, as photos released of the boy recovering in an Israeli hospital later proved.

Here’s another lie by Basem Naim retweeted by White:

Of course, the 16-year-old Palestinian girl in the photo was not “innocent”.  She was shot and then surrounded by police after she stabbed an Israeli border policeman at Ammunition Hill in Jerusalem.

It seems clear that White’s retweet of the antisemitic image was not a one-off.

The retweets shown above aren’t merely propaganda. They’re lies.  And we suggest tweeting her (@SandraWhiteSNP) and demanding that she remove the retweets and apologize.