On countless past occasions BBC audiences have been mistakenly led to believe that chronic shortages of medical supplies and electricity in the Gaza Strip are the result of Israeli restrictions on the entry of goods into the territory.

In fact, both those chronic shortages are rooted in disputes between the Palestinian Authority and the Hamas regime in the Gaza Strip. Regarding medical supplies:

The situation is further exacerbated by the fact that medical suppliers are often reluctant to sell supplies to Gaza due to issues of non-payment.”

Regarding the electricity supply:

“The Palestinian Authority purchases a liter of fuel for the power plant for approximately 4 shekels from Israeli gas companies and has tried to sell it to Hamas for almost double, including excise tax.

Hamas has rejected those prices outright and stopped purchasing fuel for its power plant. The dramatic consequence was that the power plant has shut down and the electricity supply has been completely disrupted. The PA refuses to waive the excise tax, a critical part of its own budget.”

The topics of medical supplies and electricity both appeared again in a recent BBC filmed report made for television programmes which was also promoted on the BBC News website on November 20th under the title “Life as a cancer nurse in Gaza’s main hospital“. The synopsis to that report reads as follows: 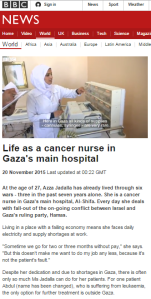 “At the age of 27, Azza Jadalla has already lived through six wars – three in the past seven years alone. She is a cancer nurse in Gaza’s main hospital, Al-Shifa. Every day she deals with fall-out of the on-going conflict between Israel and Gaza’s ruling party, Hamas.

Living in a place with a failing economy means she faces daily electricity and supply shortages at work.

“Sometime we go for two or three months without pay,” she says. “But this doesn’t make me want to do my job any less, because it’s not the patient’s fault.”

Despite her dedication and due to shortages in Gaza, there is often only so much Ms Jadalla can do for her patients. For one patient Abdul (name has been changed), who is suffering from leukaemia, the only option for further treatment is outside Gaza.”

In the report itself, viewers are told that:

“Here in Gaza all kinds of supplies – cannulas, syringes – are very rare.”

“And the electricity keeps going on and off. We have to restart the monitors.”

With BBC audiences having been inaccurately informed many times in the past that such shortages are the result of the restrictions on the entry of dual-use goods which could also be appropriated for the purposes of terrorism and with the synopsis to this report clearly suggesting a ‘connection’ between “fall-out of the on-going conflict between Israel and Gaza’s ruling party, Hamas” and “shortages at work”, it would not be surprising to find that viewers would once again go away with a misleading impression about the root causes of those shortages.

This report presented the BBC with an ideal opportunity to finally tell audiences the truth about the reasons behind the chronic shortages of medical supplies and electricity in the Gaza Strip. Notably, the corporation chose to pass up on that opportunity.