Whilst interviewing the then Israeli minister Danny Danon for the July 14th edition of the BBC World Service radio programme ‘Newshour’, presenter Razia Iqbal inaccurately stated that Israel is not under threat from Iran.

Danny Danon: “It means that we do have the capability to defend ourselves. We understand that we will have to count only on ourselves…”

Razia Iqbal [interrupts]: “But you’re not under…you’re not under threat by Iran. Nobody in Iran has threatened you for a very long time. You’re harking back to a time when President Mahmoud Ahmedinijad threatened Israel directly.”

That statement was the subject of a complaint made by a member of the public which has been upheld by the Editorial Complaints Unit. 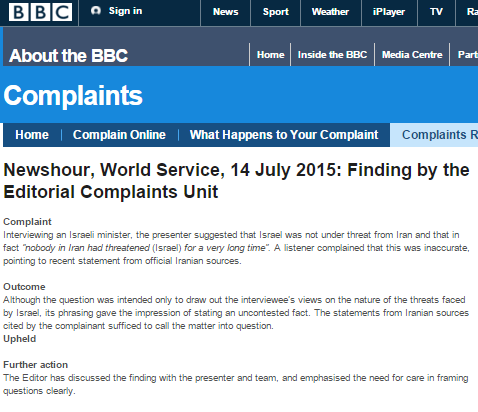 How the BBC World Service intends to relieve listeners to that programme five months ago of the misleading impression created by Razia Iqbal’s inaccurate statement is of course unclear.