Readers will no doubt recall the statement made by BBC reporter Tim Willcox whilst interviewing a participant in a rally in Paris following the terror attacks at the Charlie Hebdo offices and the Hyper Cacher supermarket in January 2015. 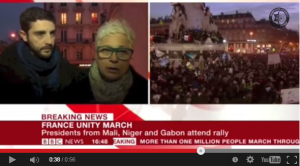 “Many critics of Israel’s policy would suggest that the Palestinians suffer hugely at Jewish hands as well.”

The BBC’s response to complaints on that issue began with the claim that an apology on Twitter sufficed, proceeded with a decision to handle the high volume of complaints en masse and culminated in their rejection. The head of the BBC’s Editorial Complaints Unit informed complainants that:

“It’s clear from a number of the comments I received that I understood the first of the summarised points of complaint (“That the question put by Tim Willcox to an interviewee was misleading in that it linked the Paris killings in a kosher supermarket with events in the Middle East”) in a different sense from some who complained.

It has been put to me, and I have accepted, that Mr Willcox’s words suggested a broader link between perceptions of Palestinian suffering and the incidence of anti-Semitic incidents.

However, that doesn’t alter the outcome because I don’t think suggesting a link of that kind can be viewed as a breach of editorial standards (or even as particularly controversial, considering the correlation between anti-Semitic incidents and Israeli actions with an adverse impact on Palestinians which has been noted by organisations such as the Community Security Trust).”

British writer and journalist Nick Cohen – who produced some typically insightful comment on the incident at the time – has now returned to that topic in an article published at Standpoint magazine.

“An associate of the Islamist gang that pumped bullets into the staff of Charlie Hebdo also took hostages at the Hypercacher supermarket at Porte de Vincennes in the 20th arrondissement. There he murdered Philippe Braham, a sales executive, Yohan Cohen, a student, Yoav Hattab, another student, and François-Michel Saada, a pensioner. The dead had provided no “rationale” and created no “particular sense of wrong”. They were ordinary citizens, shopping for food, as we all do.

But when [John] Kerry and those like him looked at their bodies closely perhaps they noticed that appearances deceived. They were not like the rest of us, after all. Hypercacher was a kosher supermarket and the dead were Jews. Few people were prepared to say what they were thinking openly, but a BBC reporter, Tim Willcox, showed no restraint. A Jewish woman in the crowd near the crime scene told him, “The situation is going back to the days of 1930s in Europe. Jews are the target now.” Willcox could not let the suggestion that Jews were innocent victims go unchallenged. “Many critics of Israel’s policy would suggest that Palestinians suffer hugely at Jewish hands,” he said, interrupting her.

If you were a Jew, it was Israel’s fault that you were murdered, and possibly your fault too for not trying to pass as a gentile, or avoiding synagogues, and Jewish shops and restaurants, or changing your name and ditching your kippah.

Read the full article – titled “Shame On The Liberals Who Rationalise Terror” – here.