The December 20th edition BBC World Service radio programme ‘Newshour’ – presented by Rebecca Kesby – included an interview with Smadar Haran Kaiser (from 04:11 here) which was promoted as follows at the start of the show.

“Coming up on the programme today we’ll have reactions to the death of the Hizballah leader from a woman whose entire family was killed in a raid he took part in. It’s a compelling story from a woman with every reason to hate but who refuses to do so.” 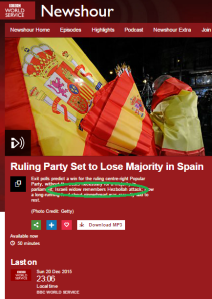 The synopsis appearing on that programme’s webpage promotes the item as follows:

Kuntar and his three associates did not of course carry out the terror attack in Nahariya in 1979 on behalf of “Hezbollah” (which – according to the BBC’s own profile of the organization – did not even exist at that time) but as Palestine Liberation Front operatives.

In her introduction to the item, Kesby upgraded Kuntar’s status within Hizballah ranks and predictably failed to inform listeners that it is an internationally designated terrorist organization.

“Now, one of the most senior leaders of the Shiia militant group Hizballah has been killed in Damascus. Samir Kuntar died when missiles hit a residential building in the Syrian capital. The Lebanese-based group blames Israel for the attack. They haven’t confirmed or denied it, although an Israeli minister did welcome the news of his death earlier today. Several rockets were later fired into northern Israel – perhaps in retaliation for the assassination – and we understand mortars were then fired from Israel into Lebanon.”

The subsequent part of the introduction indicates that Kesby had no idea who she was interviewing and her ignorance concerning the circumstances of the Nahariya attack obviously misleads listeners.

“Well Samir Kuntar had previously been jailed by the Israelis for a notorious attack on a police officer and his family back in 1979. We’ll be hearing from that policeman’s widow in just a moment…”

Smadar Haran Kaiser is of course the widow of Danny Haran who was murdered by Kuntar and his group together with their four year-old daughter Einat. The murdered policeman was Eliyahu Shahar.

“… but first, Rami Khouri is a senior fellow at the American University in Beirut. He told me more about Samir Kuntar.”

Khouri was given a platform from which to whitewash terrorism against Israelis by means of inaccurate rebranding.

A “guerilla operation” would by definition be directed against regular military forces. Kuntar’s cell targeted a civilian apartment building after killing a policeman who happened upon them by chance and then murdered a father and his small daughter. Kesby made no attempt to relieve audiences of the inaccurate impression given by Khouri and notably listeners were not told of the circumstances of Einat Haran’s death.

“Well Smadar Haran Kaiser’s husband was murdered by Samir Kuntar and her two daughters were also killed in that attack.”

Fortunately, Smadar Haran Kaiser proved to be more than capable of dealing with Kesby’s statements-cum-questions – several of which do not relate to the terror attack itself.

“The Israeli authorities haven’t confirmed or denied that they were responsible for this assassination today. Do you think they were and do you support it?”

“Is there a danger that this kind of attack provokes yet more violence?”

But in addition to the inaccurate information given to listeners, what is notable about this item is that (like most of the corporation’s coverage of this story) it focuses audience attention on the past, avoiding all mention of Kuntar’s more recent activities as an operative for Hizballah and Iran in Syria. That information is of course much more relevant to BBC audiences trying to understand the story.