The Christmas season inevitably brings with it opportunistic, politicised messaging from the BBC’s Jerusalem Bureau and this year was no different. Apparently short on fresh ideas, Yolande Knell casts local residents in the role of nativity story figures in her report titled “Christmas in Bethlehem: Hopes and fears for the future” (December 24th, BBC News website Middle East page) – a device she previously used in her 2011 seasonal report. 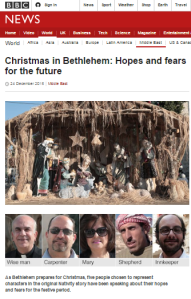 Including both text and video clips, the report promotes the themes of a low-key Christmas and economic hardship for Bethlehem residents. No mention is made of the Palestinian Authority’s instructions to municipalities to dampen this year’s celebrations or the Council of Churches’ similar dictate.

The surge in Palestinian terrorism that began in mid-September and which has obviously had an effect on the tourist industry in the region receives minimal coverage in Knell’s account, although when it is mentioned she portrays it as equivalent “Israeli-Palestinian violence” and – in line with PLO messaging – downplays the incitement fueling that violence. Instead, Knell focuses more on what she terms “protests” and “clashes” whilst erasing the agency of Palestinian rioters and terrorists sabotaging their own community’s all-important tourism industry.

“Young Palestinians regularly join protests that result in confrontations with Israeli soldiers. There are flashpoints across the West Bank including on the edge of Ramallah and in Bethlehem.”

Israel blames the violence on incitement by Palestinian leaders and social media. Father Jamal says that on the Palestinian side there are feelings of hopelessness and despair.” 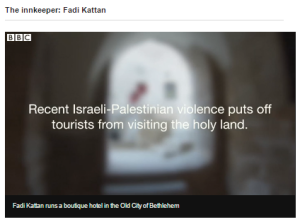 The predominant messaging in this report relates to the anti-terrorist fence. In line with the corporation’s usual portrayal of that subject, Knell fails to provide BBC audiences with an objective and transparent account of the reasons behind the fence’s construction and its proven record of reducing the number of terror attacks against Israelis.

“Israel has also built part of its separation barrier here. It says this is needed for security, but Palestinians see it as a land grab.”

“In 2003, an 8m (26ft)-high concrete wall was erected in Bethlehem – part of Israel’s barrier built in and around the West Bank. A series of gates were constructed in the wall so that church leaders could continue to pass.”

“About 40% of the Bethlehem economy relies directly on tourism. However since the town was separated from Jerusalem by Israel’s barrier, most tourists now enter through an Israeli checkpoint.” 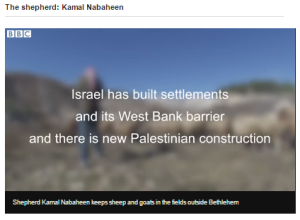 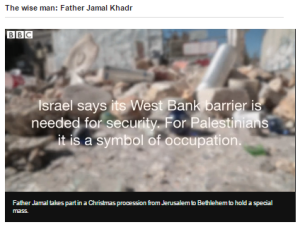 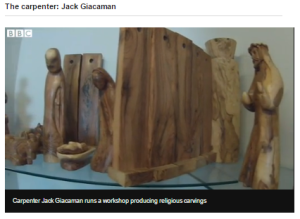 The fence is also the hook for promotion of the theme of restricted access resulting in reduced business.

“Local souvenir sellers say that restricted access to the city has greatly affected their trade.”

Video clip 5: “…Bethlehem is now surrounded with a wall; not easily accessed in and out like before between Jerusalem and Bethlehem. This limited the number of tourists who come to Bethlehem to doing shopping for Christmas. “

In fact, the crossing used by tourists going from Israel to Palestinian-Authority controlled Bethlehem is open 24 hours a day, seven days a week and foreign tourists do not need permits. As usual, this year too arrangements have been put in place to enable Palestinian Christians to celebrate the holiday with their relatives.

An additional theme in this report relates to ‘settlements’ – alleged to be “expanding” – with the standard BBC mantra concerning ‘international law’ appearing together with a recycled map.

“Recently shepherding has become much more difficult because of a lack of open land. Jewish settlements are expanding nearby. They are seen as illegal under international law, but Israel disagrees.”

Absent from Knell’s reporting is any mention of non-Israel related factors which might have an influence on Christmas celebrations and tourism in Bethlehem such as crime or violence related to internal Palestinian politics.

“The car taking Latin Patriarch of Jerusalem Fouad Twal, head of the Catholic Church in the Holy Land, was struck Friday, Christmas Day, in Bethlehem by rocks thrown by Palestinian rioters. […]

A Palestinian security officer said Friday the suspects set fire Wednesday to the tree in Zababdeh, a village near Jenin populated mainly by Christians. The officer spoke on condition of anonymity because he wasn’t authorized to speak to reporters.

He said both suspects were under investigation for possible ties to extremist Islamist groups.

A report in the Palestinian Ma’an news agency put the number of detainees at 16. According to the report, the group are Salafi radicals who were preparing to carry out a terror attack against Western tourists arriving in Bethlehem to celebrate Christmas there.”

Yolande Knell’s selective portrayal of Christmas in Bethlehem is clearly designed to promote a political agenda and there is no reason to be surprised about that given her past record and her openly displayed identification with such political causes. Amazingly for a media organization supposedly committed to accurate and impartial reporting, the BBC continues to countenance her annual exploitation of Christmas for the opportunistic force-feeding of its audiences with trite anti-Israel delegitimisation.