“Well now to a brighter story” says ‘Newshour’ presenter Lyse Doucet at the end of an item (available here from 34:00) broadcast on that BBC World Service radio programme on December 31st. 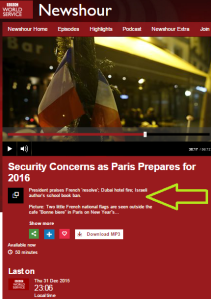 That remark of course serves to underscore the ‘darkness’ of the previous story: one which is misleadingly described in the programme’s synopsis as “Israeli author’s school book ban” and was also promoted by the BBC on social media as a separate abridged item under the title “Israel bars Arab-Jewish love story from schools”.

This, however, is not a story about the ‘banning’ or ‘barring’ of a book as those two inaccurate and sensational descriptions suggest, but one which actually relates to the decision of a pedagogic committee at the Ministry of Education not to include the book in the curriculum of the Bagrut (equivalent to GCSE) in literature. Doucet’s introduction to the item suggests that she is well aware of the background to the story.

“It [the book] was recommended for an advanced literature course in Israeli high schools but it’s now been rejected by the Ministry of Education.”

Nevertheless, during her subsequent conversation with the book’s author, Doucet makes no attempt to relieve listeners of the inaccurate impression given by Dorit Rabinyan that the decision not to include the book in the curriculum was made by politicians rather than by a pedagogic committee.

Rabinyan: “This is a time of extremers [sic]. I think deciding to reject a book is an act of the regime that has been controlling Israel in the past decade.” […]

Neither does she challenge Rabinyan’s later inaccurate and misleading allegations concerning the significance of the committee’s decision.

“and it’s [purchase of the book by members of the public] a big declaration of support and belief that the freedom of speech – the artistic freedom – shouldn’t be harmed, shouldn’t be even threatened….”

Rabinyan’s book ‘Gader Haya’ was published in Israel six months ago and subsequently won a literary prize. The book has not been “banned” as she also later claims in this interview and no-one – including high school students – is ‘barred’ from reading it. Rabinyan’s freedom of speech and artistic freedom have clearly neither been “harmed” nor “threatened” by the fact that a pedagogic committee of the kind also found in other countries decided that – like countless other books and for assorted reasons with which one can agree or not – hers would not be included in the curriculum.

The inaccurately worded synopsis and clip title, the obvious lack of fact-checking of the source of this story and Doucet’s failure to adequately clarify the above points do little to convince the observer that the producers of this BBC World Service item intended listeners to go away with anything other than impressions of a ‘dark’ story about ‘Israelis banning books’.