An article which appeared on the BBC News website’s Asia and Middle East pages on December 31st under the title “Israel apologises to Singapore for flag ‘misuse’” opens with the following description of the story: 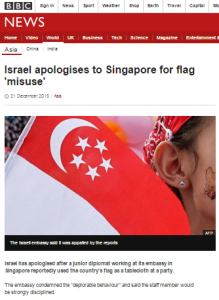 “Israel has apologised after a junior diplomat working at its embassy in Singapore reportedly used the country’s flag as a tablecloth at a party.” [emphasis added]

The Israeli media, however, reported that the person concerned was not a “junior diplomat” as claimed by the BBC but a security guard.

“A low-level security guard at the Israeli embassy in Singapore caused a diplomatic incident when he was photographed at a party in his home using the Singapore flag as a tablecloth.”

“Images of the flag draped over a table at a party allegedly hosted by the diplomat were posted online on Monday by a user who said a police report had been filed.

He accused the foreign party host of having “no respect for our country and our flag”.”

In fact – as the link promoted by the BBC shows – the very selectively quoted complainant did not use the words “foreign party host” but instead employed a term considered as derogatory.

“These Ang Mos really have no respect for our country and our flag! They come to our country to steal our jobs, our women and now they even think that they can step all over us by insulting and disrespecting our sovereignty! “

One would of course not normally expect the BBC to promote a link to a xenophobic rant of the type above. It would however appear that such standards fall by the wayside when a story from the popular ‘Israelis behaving badly’ genre is in the offing.