BBC coverage of the ongoing wave of Palestinian terrorism against Israelis which began in mid-September has been hallmarked by blanket avoidance of the use of the word terror to describe the attacks or of the term terrorist to describe the perpetrators.

Experienced observers of BBC content will not have been surprised by that: the relevant BBC editorial guidelines state:

“There is no agreed consensus on what constitutes a terrorist or terrorist act. The use of the word will frequently involve a value judgement.

As such, we should not change the word “terrorist” when quoting someone else, but we should avoid using it ourselves.” [emphasis added]

Whilst those guidelines are controversial and considered by many to be unfit for purpose, they are ostensibly the basis for all BBC reporting on the subject of terror attacks. Nevertheless, we have often documented the BBC’s inconsistency in adhering to those guidelines on these pages, pointing out that they are applied in some geographical locations but not in others. We have also criticized the corporation’s use of coy euphemisms such as ‘militants’ or ‘radicals’ to describe members of recognized terrorist organisations such as Hamas and Hizballah and its serial avoidance of use of the word terror in reports on violent attacks against Israelis.

In our view, the BBC’s inconsistent application of those editorial guidelines and the resulting two-tier system of reporting is evidence of precisely the type of “value judgement” it supposedly seeks to avoid and indicates that the choice of language when reporting acts of terror is subject to political considerations which undermine the BBC’s claim of impartiality.

If further evidence of those double standards were needed, it could be found in an article published on the BBC News website on January 3rd under the title “Israelis charged over fatal West Bank family arson attack“. 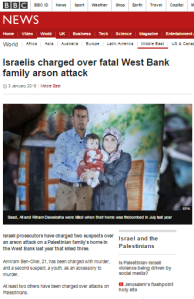 There, not for the first time, readers found the words “Jewish terrorists” used not in a quote, but by the BBC itself.

“It also prompted the Israeli government to approve the use of administrative detention – a procedure under which a military court can order suspects to be detained indefinitely without charge or trial – for suspected Jewish terrorists.”

The BBC’s description of detainees in cases such as the murders of three sleeping members of the Dawabshe family in the arson attack in Duma on July 31st 2015 as “suspected terrorists” is of course accurate. Despite the fact that this article confines itself to noting “international condemnation” of the Duma attack and even amplifies baseless accusations concerning the investigation into the attack from a family member, such wording appropriately reflects the Israeli government’s classification of the attack from the very beginning.

The trouble is that the BBC does not use the term terrorists to describe them or the perpetrators of countless other attacks against Israelis to its audiences. It is high time that it explained to its funding public why that is the case.