In recent weeks visitors to the BBC News website have frequently come across a standard inclusion in articles relating to the subject of the ongoing wave of terror attacks against Israelis which goes along these lines:

“Israel says Palestinian incitement has fuelled the attacks. The Palestinian leadership has blamed frustration rooted in decades of Israeli occupation.”

As has been noted here on countless occasions over the past few months, BBC News has refrained from providing its audiences with any serious reporting on the topic of the incitement underpinning the current wave of terror, choosing instead to consistently present that issue in terms of “Israel says”.

Hence it was not overly surprising to see that for the consecutive third year – see ‘related articles’ below – there was no BBC coverage of the recent ‘Fatah Day’ celebrations (the anniversary of the group’s first terror attack against Israel) in Palestinian Authority controlled areas.

Fatah is of course the controlling party in the Palestinian Authority as well as the largest faction in the PLO. The BBC’s most recently published profile of that party describes it as follows:

“Under Arafat’s leadership, the group originally promoted an armed struggle against Israel to create a Palestinian state. But it later recognised Israel’s right to exist, and its leaders have led Palestinian peace talks aimed at reaching a two-state solution.”

Readers of that profile are also told that Fatah “signed a declaration rejecting attacks on civilians in Israel and committing themselves to peace and co-existence.”

The BBC’s Palestinian Territories Profile has the following to say about the head of the Fatah movement:

“Many analysts regard Mahmoud Abbas as a moderate. He has condemned the armed Palestinian uprising and favours the resumption of negotiations with Israel.”

One might therefore have expected the media organization which describes itself as the “standard-setter for international journalism” to have reported that – as has so often been the case in the past – this year’s Fatah Day celebrations did not reflect that supposed rejection of terrorism and commitment to “peace and co-existence”.

The pictures below come from the Fatah Day rally in Bethlehem – courtesy of Israeli journalist Gal Berger,  along with those that follow.

These pictures are from Birzeit University near Ramallah. 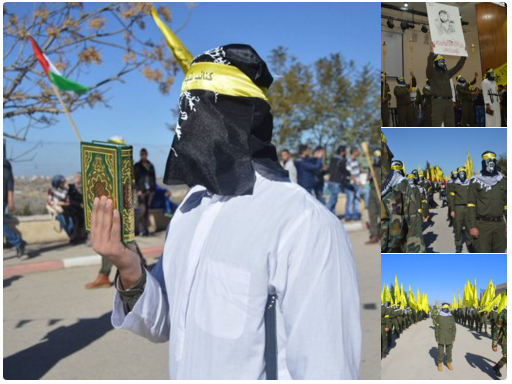 On Fatah social media accounts (translated by PMW) the movement celebrated “Half a century of sowing terror in the eyes of the sons of Zion” and vowed “With blood we will redeem the homeland and saturate its ground”.

Via MEMRI we learn that:

“In his Fatah Day speech in Ramallah, PA President Mahmoud Abbas reiterated his support for young Palestinians who set out to commit terrorist attacks, and senior Fatah officials likewise expressed support for the Palestinian people’s “awakening” and resistance in all its forms.”

Members of the BBC’s audience seeking to enhance their understanding of the topic of the failure of the ‘peace process’ and the background to the current violence clearly need to be informed of this – and related – news. The BBC, however, continues to promote its stylized and sanitized portrait of the Palestinian Authority, Fatah and Mahmoud Abbas whilst studiously avoiding any real reporting on the crucial topics of incitement and glorification of terrorism.