On January 19th an article titled “Palestinian workers banned from West Bank settlements” appeared on the BBC News website’s Middle East page. The subject matter of the story portrayed in that headline takes up part of the report which then goes on to inform readers that: 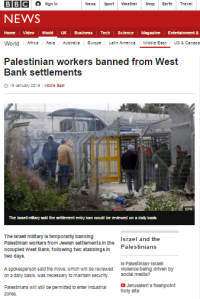 “About 500,000 Jews live in more than 100 settlements built since Israel’s 1967 occupation of the West Bank and East Jerusalem. The settlements are considered illegal under international law, though Israel disputes this.”

The article closes with provision of a link to a report published on the same day by Human Rights Watch.

“Also on Tuesday, a new report by Human Rights Watch said businesses operating in settlements contributed to “an inherently unlawful and abusive system that violates the rights of Palestinians” and called on them to pull out of the region.

Israel’s foreign ministry called the report “one-sided”, and said it “jeopardises the livelihoods of thousands of Palestinians and discourages rare examples of coexistence, co-ordination and co-operation between Israelis and Palestinians”.”

Whether the writer of this BBC article had time to read that 51,000 word report properly and to independently verify its content before promoting it to audiences is doubtful. What is apparent is that the BBC quotes from it without informing readers of HRW’s inherent agenda in relation to Israel and without informing them that its bottom line – as shown on its back page – is to add wind to the sails of the BDS movement.

“…it [the report] concludes that the only way settlement businesses can comply with their responsibilities under international human rights standards is by ending their businesses in settlements or in settlement-related commercial activity.”

As NGO Monitor points out:

“There is no rule whatsoever in international law prohibiting doing business in occupied territory and no court addressing this issue, most recently the European Court of Justice, has ruled otherwise.  In addition, many courts have ruled that boycott campaigns similar to that promoted by HRW in this publication amount to illegal national origin discrimination.”

Readers can find more on the legal aspects of the subject in a paper tiled ‘Economic Dealings with Occupied Territories’ published by Professor Eugene Kontorovich.

Given that HRW is one of the political NGOs most frequently promoted by the BBC in Israel-related content and in light of the fact that the BBC has frequently engaged in promotion of the BDS agenda, it is hardly surprising to find this latest report promoted in BBC content without due attention to impartiality.

Like Loading...
Tags from the story
BBC, BBC News, BBC Online, BDS, HRW, Impartiality, Israel, Settlements
Written By
Hadar Sela
More from Hadar Sela
We are informed that the BBC has appointed a new director of...
Read More