When locals in the southern Lebanese village of Bint Jbeil captured and abused a griffon vulture which recently strayed from an Israeli nature reserve, the BBC could have done a story about the considerable efforts on the part of Israeli nature conservation organisations to protect that species of bird and others.  It could also have used the opportunity to highlight the problem of illegal hunting of wild birds in the Mediterranean area.

“About 25 million birds are illegally hunted and killed or captured every year in countries bordering the Mediterranean, and many of these countries have adopted a policy of looking the other way when it comes to the mass killing of the winged creatures, a report released over the weekend by the group BirdLife International claims. On the other hand, Israel, the report says, has the best record among Mediterranean countries when it comes to bird conservation.

The most wide-scale slaughter is being committed in Egypt and Italy, says the report from BirdLife International, the world’s largest organization dedicated to the protection of birds, while the island nation of Malta has the worst record in relation to its size. Many of the avian creatures are killed or captured in the course of their seasonal migration between Europe and Africa.

After Egypt and Italy, the worst offenders on the list are Syria and Lebanon, which together account for the deaths of six and a half million birds every year. “

Instead, the self-styled “standard setter for international journalism” chose to take a different approach to the story, focusing on the obviously groundless and downright ridiculous suspicions of the Lebanese villagers that the captured griffon vulture was carrying espionage equipment. The BBC was far from the only media organization to report the story from that angle, but at least the Guardian, for example, made the essence of the story quite clear to readers.

“Conspiracy theories are endemic in the Middle East.”

The BBC, however, elected to add credence to such silly conspiracy theories with wording such as “Lebanon returns Israeli vulture cleared of spying” – presumably written with a straight face. 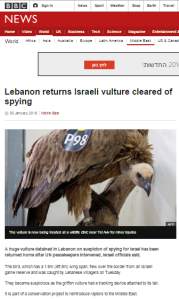 “A huge vulture detained in Lebanon on suspicion of spying for Israel has been returned home after UN peacekeepers intervened, Israeli officials said.”

“The Lebanese media says the villagers freed the vulture after it became clear it was not on a spying mission.”

“It is not the first time a griffon vulture has been taken to be an agent of the Israeli spy agency Mossad.

Saudi Arabia captured one, also with a Tel Aviv University tracker, in the desert city of Hyaal in 2011, sparking rumours of a “Zionist plot” that were dismissed by Israeli officials.” [emphasis added]

No better was Julian Marshall’s introduction to an item (here from 39:28) concerning the same story which was broadcast on the BBC World Service radio programme ‘Newshour’ on January 30th and billed in the synopsis as being about ‘Animals as “spies”‘.

“Now to a tale of airborne espionage and conspiracy. Last night a griffon vulture was released by Lebanese authorities – cleared of spying for Israel after UN peacekeepers intervened.”

Despite the fact that the story is obviously not about “airborne espionage” at all, Marshall further stoked the fires in his conversation with his interviewee.

“Ahm…and what made the villagers suspicious was a tracking device attached to its tail. But I suppose that could equally have been a camera, couldn’t it?”

When the BBC reports on the abuse of endangered birds of prey in its own domestic arena it does not find it necessary to ‘explain’ the story by pandering to ridiculous conspiracy theories. As one of the representatives of Israel’s Nature and Parks Authority put it:

“In the 21st century we expect people to understand that wild animals are not harmful.”

The question that therefore arises is why the corporation does not similarly report stories from the Middle East – and especially those which it makes available to audiences in that region – in an equally factual and accurate manner.

BBC gets in on ‘Mossad Spy Zoo’ action