COGAT recently announced the extension of the fishing zone along part of the Gaza Strip coastline.

Despite the interest in the Gaza fishing industry shown by the BBC in the past, there was no reporting of this news on the English language BBC News website. The story did however get coverage on the BBC Arabic website. 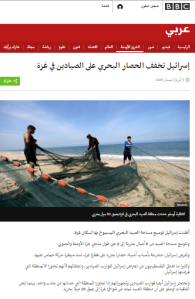 As readers may recall, that inaccurate claim has been made on several prior occasions and has also been corrected by the BBC in the past. It is therefore all the more unfortunate to see the same error appearing in BBC content time after time.

Both the caption to the photograph illustrating the report and its final paragraph inform readers that under the terms of the Oslo Accords, the fishing zone was to extend to 20 nautical miles from the coastline. That statement is of course accurate, but readers are not informed that the party which currently controls the Gaza Strip opposed those accords and is not a signatory to them, that it ousted the party which did sign them in a violent coup or that it was Hamas terrorism and arms smuggling which necessitated the reduction of the fishing zone.