On May 3rd the Jerusalem Post and other Israeli media organisations reported the following story: 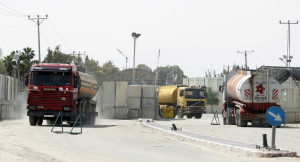 “Security forces have foiled an attempt to smuggle into Gaza four tons of chemicals that can be used to manufacture long-rang rockets, the Shin Bet (Israel Security Agency) announced on Tuesday morning.

Before the Passover holiday, customs and Shin Bet officials at the Nitzana Border Crossing used by Egypt, Israel and the Palestinian Authority seized the four tons of ammonium chloride concealed within a shipment of salt.

The Shin Bet estimates that the importer of the latest smuggling attempt is a Gaza resident associated with Hamas. The importer was believed to have been urged by the terrorist group to bring the materials into the Strip for manufacturing use by Hamas.”

As has been the case on numerous occasions in the past – see for example here, here and here – BBC audiences did not get to hear about this latest attempt to smuggle materials for the purposes of terrorism into the Gaza Strip.

That of course means that when the BBC refers to ‘tight restrictions’ in relation to the Gaza Strip border – as it frequently does – audience understanding of why such measures need to be in place continues to be impaired.