“Presenters, reporters and correspondents are the public face and voice of the BBC – they can have a significant impact on perceptions of whether due impartiality has been achieved.  Our audiences should not be able to tell from BBC output the personal prejudices of our journalists or news and current affairs presenters on matters of public policy, political or industrial controversy, or on ‘controversial subjects’ in any other area.  They may provide professional judgements, rooted in evidence, but may not express personal views in BBC output, including online, on such matters.” (Section 4.4.13, BBC Editorial Guidelines on Impartiality)

(BBC Guidance on Social Networking and Other Third Party Websites (including Blogs, Microblogs and Personal Webspace): Personal Use)

Given the above it is obviously less than ideal for a BBC correspondent to be found retweeting an article supposedly “Exposing the fake anti-Semitism scandal manufactured to shatter Labour’s left-wing” – especially when that article was written by a well-known professional anti-Israel activist renowned for making up delusional allegations and straying into the realms of antisemitism. 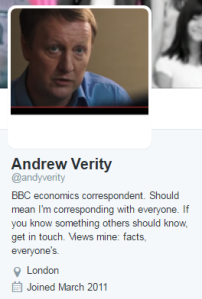 This is apparently what he thinks is worth reading “on an issue of current public controversy or debate”.