Here’s the passage in question, quoting a speech in Ireland given by Bethlehem’s Mayor, Vera Baboun:

“The situation is really difficult,” she said. Israeli visa restrictions mean international students cannot attend the university, cutting off one likely stream of revenue. Only three-month tourist visas were available to such students.

However, as Van Zile noted in his CAMERA post, the claim that Israeli policy makes it impossible for international students to attend Bethlehem University seemed inaccurate.

Van Zile cited information about international students on Bethlehem University’s website, as well as an email exchange he had with a representative of the university confirming that such students can indeed enroll. 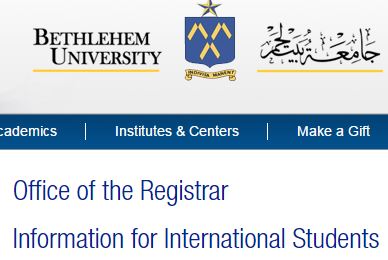 Shortly after the post, we followed up with editors at the Irish Times asking them correct the false claim.  Though several of our emails to editors at the foreign desk went unanswered, we eventually received a reply from the managing editor who confirmed that he passed along our complaint to the paper’s readers’ editor.

After several more weeks, and follow-up research on the story by the Irish Times, the readers’ editor confirmed that our concerns were valid, and that they’d be revising the article to note that, despite Israeli visa restrictions, international students can indeed attend Bethlehem University.

“The situation is really difficult,” she said. Israeli visa restrictions mean international students cannot attend the university unless they apply for three-month tourist visas, and not many want to do so. So international student numbers and the revenue they bring in are reduced.*

We thank the Irish Times readers’ editor for agreeing to the correction.